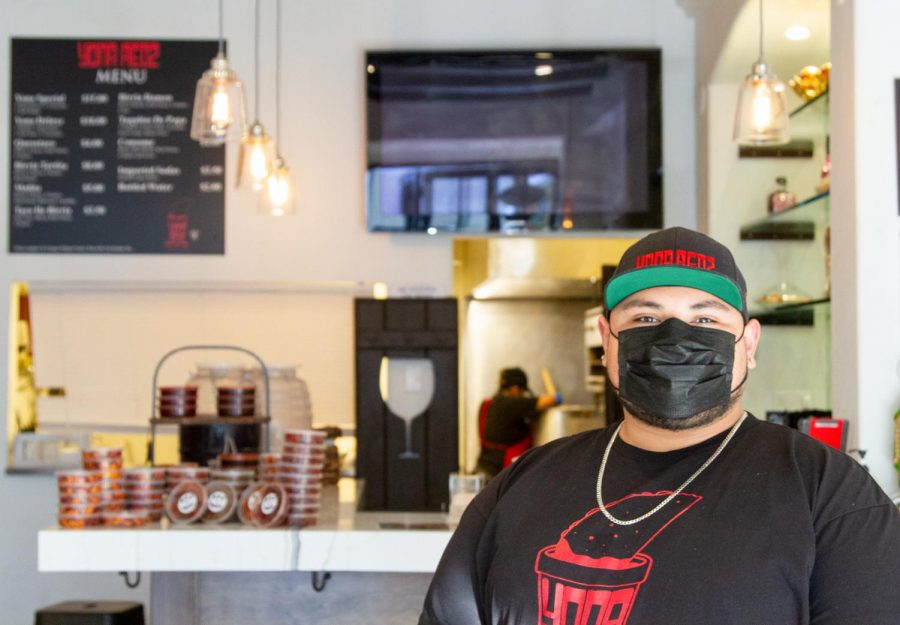 Less than 10 months ago, Jonathan “Yona” Estrada was in his backyard, slow-simmering a fresh batch of his family’s secret-recipe birria and selling tacos grilled on a flat top he purchased for less than a hundred dollars.

“That’s where it all started,” Estrada said.

Estrada had always loved birria—a deep, savory goat or beef based stew traditionally from Jalisco, Mexico—but it wasn’t until last May that he started the backyard taco stand, which soon became pop-up shops and now his first brick-and-mortar shop, Yona Redz.

Located in the heart of one of downtown’s busiest blocks, Yona Redz has overcome the hurdles of opening during a pandemic and quickly become a hotspot along State Street’s new promenade.

Estrada said the Nov. 15 grand opening was one of the best days of his life—Mayor Cathy Murillo stood next to him at the ribbon-cutting, a line snaked around the block and the restaurant sold out of tacos within hours.

“I had to pinch myself,” he said. “It was overwhelming.”

Estrada said leaving full-time employment with benefits and insurance was a hard decision to make, but seeing the shop succeed almost immediately validated his decision to quit and pursue Yona Redz full-time.

The menu is simple.

Birria is available in multiple forms: Tacos, quesotacos, tortas and even a ramen option, along with vegetarian-friendly options like the potato-filled taquitos.

The birria simmers all day, each hour adding another layer of flavor to the rich, aromatic and spicy consomé, the hearty stock to be used as both a sauce and broth.

The “Yona Special”—a $15 plate of three quesotacos, a cup of consomé for dipping and a drink—starts with tortillas dipped in the deep red sauce and slapped on the plancha, sizzling while chile-soaked beef, cheese, cilantro and red onion meld together into a steamy savory bite.

Cheyla Deloya works the front counter, and she said she loves being a part of the close-knit team at Yona Redz.

“It felt like family from the jump,” Deloya said.

She said she found the shop through Instagram, which has been a big factor in its growing popularity.

Estrada started posting on social media last May, and has since amassed nearly 6,000 followers.

Birria is one of many foods attaining cult status on platforms like TikTok, where the hashtag #birriatacos has received more than 319 million views.

Estrada said he expected most of his customer base to be friends and family, but a couple weeks after opening he was stunned to see that most of the customers were people he’d never seen before.

He said he is proud to have the support of his community, and the best confidence-boost is seeing people come back for seconds, or ordering more tacos to-go after finishing their meals.

Estrada’s vision for the future of Yona Redz starts with a new location in Isla Vista, something he’s very excited about.

He works almost every day, and can be seen in the front of his shop talking to customers or out on the outdoor dining patio, where he says is the best place to enjoy his food.

“It’s always better when it’s fresh off the plancha,” he said.