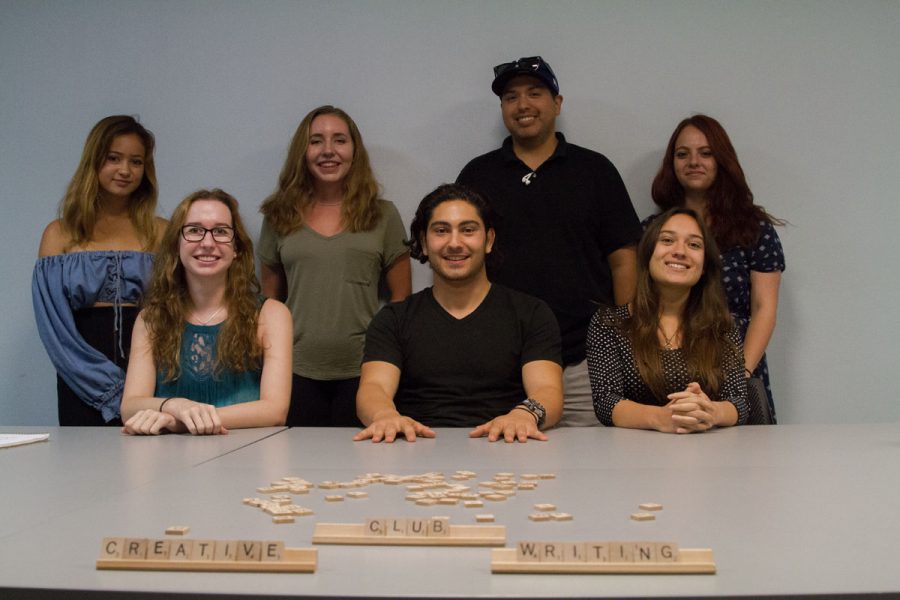 Creative Writing Club Thursday, Oct. 19, in the club room in the Campus Center. The club meets every Thursday from 4 to 5 p.m. and do writing based activities including games and free writes.

Fits of laughter could be heard from a small group of seven students sitting around a table as they shared their most outlandish ideas for the use of a single paperclip.

This fun, silly atmosphere is how a typical meeting for the Creative Writing Club begins.

“Often times we start our meetings off with a fun game as a sort of icebreaker,” co-vice president Lauren Caspersen said. “After that, we usually have a free write session to get the juices flowing.”

One free-write session had a prompt: “soul or sole.” Once the prompt was announced, the goofy, giggly vibe turned into a more quiet and serious tone as members got to work on their writing. The prompt was thought of by Casperson, however anybody can suggest one or suggest not to have one at all.

After the free write portion of the meeting, the club members often are able to either read what they wrote, or share another piece they have been working on at home for constructive feedback.

Club president Thane Justin Balayan explained the purpose of the club is to be a place where fellow creative writers can share their work, critique each other’s work, and to essentially just have a space to share ideas with like-minded people.

Balayan said his role as president includes obtaining grant money and organizing club events. The club has held open mic night events since it’s start up in the 2015 fall semester, and he hopes to hold another one later on this semester.

As part of the effort to host the open mic night, the club has organized a bake sale from 9 a.m. to 12:45 p.m. Tuesday, Oct. 24 outside the Luria Library.

Club member Andrea Gaytan said she is grateful to have a space on campus where writing isn’t just another academic requirement for a class.

“I was so focused on school I didn’t have time to write creatively anymore,” Gaytan said. “I feel that this club pushes me to write because it’s my passion, not because it’s required to get a grade.”

Club member, Linnea Pejcha, said that what attracted her to the club the most is the inspiration it gives her to continue writing.

“It’s really cool to be surrounded by people who love writing as much as I do,” Pejcha said. “After every meeting, I am inspired to write more as soon as I get home.”

The Creative Writing Club is open to any students with a passion, or even a mere interest, in creative writing. The club meets at 4 p.m. every Thursday in the Campus Club Room.