Lady Vaqueros redeem themselves against Allan Hancock in home game 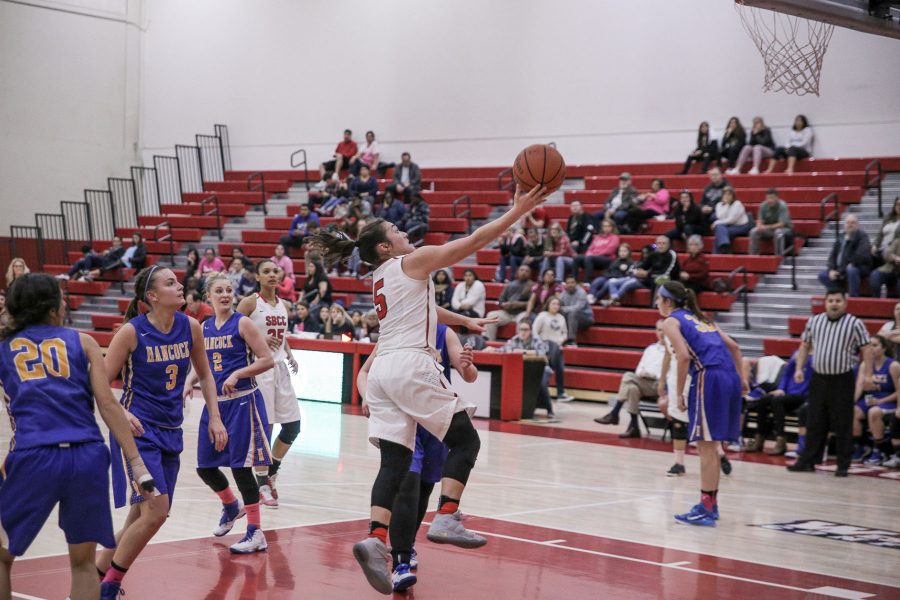 Liliana Ponce (No. 5) shoots a quick two-pointer in the game against the Hancock College Bulldogs on Saturday, Feb. 11, in the sports pavilion at Santa Barbara City College. The Vaqueros won 64-41.

The Lady Vaqueros changed their previous fate against Allan Hancock College as they cruised to a 64-41 win Saturday night at the Sports Pavilion.

The last time these two teams faced each other, Allan Hancock won 71-50. This time around, the Lady Vaqueros made sure that they came out with the win.

“The most important thing for our team to continue to do is believe in each teammate to rebound, defend, score, and keep our two and two philosophy relevant,” said coach Sandrine Krul.

City College did that and much more Saturday as they kept the lead for the entire game.

At the end of the first quarter, City College was up 19-8. Destinee King (No.25) had a big first quarter for scoring eight points on four out of four shooting.

The most adversity the team faced in the game was late in the first half. Hancock ended the half on an 8-0 run to cut the City College lead to 31-25.

The “Nifty nine,” as named by coach Krul, got off to a strong start in the second half and didn’t let up for the rest of the game.

“We were just having fun and passing the ball,” said Liliana Ponce (No.5).

The Lady Vaqueros started the second half on a 12-0 run, which ended with a King and-one that put the team up 43-25. After yielding an 8-0 run to Hancock after the run of their own, City College stomped on the gas and didn’t let up for the rest of the game. At the end of the third quarter, City College led 47-33.

“We really worked together as a team tonight,” said Stella Dullay (No.33).

“We need to stick with our two’s and two’s,” said Dullay. “When we do that we are really playing as a team.”

Following the win, City College moved past Allan Hancock in the standings at 15-10 and is now third place in the Northern Conference. Allan Hancock dropped to 14-10 in what was a big win for the Lady Vaqueros.

“If we execute on the simple things, we should win against Moorpark,” said Ponce.

Moorpark will be a tough task for City College, as they are 18-9 on the season. City College is 0-2 against Moorpark this season. The last time the two teams played, Moorpark prevailed 59-58.

“This win gets us pumped up for the next game. We are pumped to go out there and get another win,” said Ponce.