Pink shorts, stegosaurus sweater and bear belt buckle: Who is he? 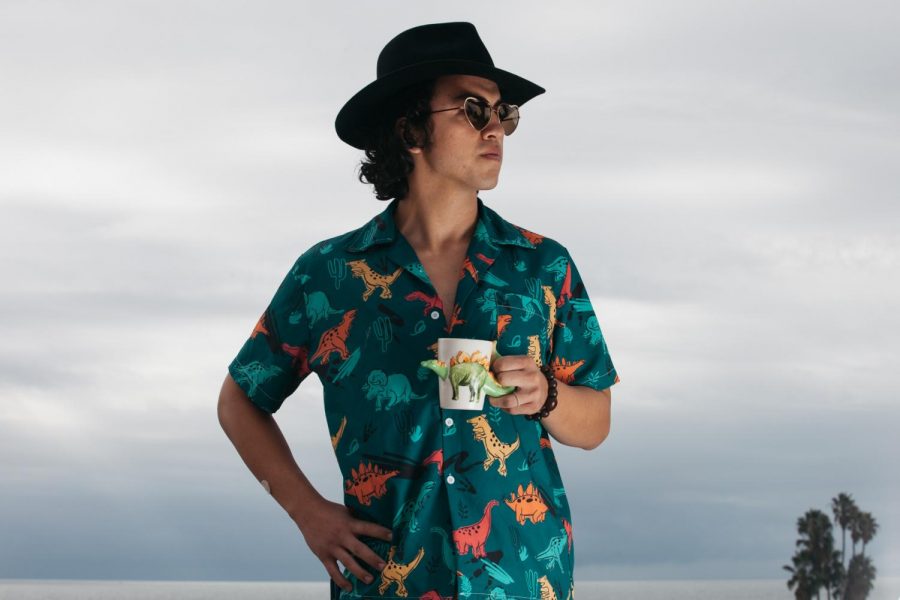 Kai Zheng known by friends, family and colleagues for his charming personality, musical talent and sense of style stands above La Playa Stadium on Thursday, Dec. 5, 2019 at City College in Santa Barbara, Calif. Zheng is a journalism major and serves as Arts and Entertainment Editor for The Channels Newspaper.

If you were to see me in passing, perhaps across the street or getting a cup of coffee, the first thing you might notice about me is what I’m wearing.

From head to toe, you might see a “Friends” baseball cap atop a head of long curly hair, a set of shoulders dawning my mother’s bright blue Patagonias straight out of the ‘90s, a silver bear belt buckle big enough to stop a bullet holding up tight, black pants, all over white Doc Martens adorned by the careful design of a tattoo artist.

Other days it might be a pink sweater with a stegosaurus on it and white pants and soccer shoes. Don’t be fooled, I’m not much of an athlete. The only time I played soccer on a team I ran off the field crying.

In fact, the clothes I put on are how I feel comfortable in my own skin.

It’s a way of saying who I am without telling you.

To most guys, putting on a pink dinosaur shirt and strutting out the door may seem unfathomable.

Is it the fact that pink has been construed in society as a feminine color? And if so, what about wearing feminine colors bothers the average guy so much?

Truth be told, a few years ago it would’ve seemed unfathomable to me, too.

As a kid, I always wanted to stand out from the crowd. From catching and eating bugs during recess to wearing my wolf suit from Where the Wild Things are to school, I was determined to stick out like a sore thumb.

Growing older, this unshakeable sense of difference began to crumble.

In sixth grade, I still wore my hair long. But as time went on, the constant comments from classmates cracked away at my sense of individuality.

Come eighth grade, I had a conventional crew cut. I HAD to have Vans (very in style at the time). I couldn’t stick out, or I’d be a target.

Eventually, my sense of individuality began to grow. In ninth grade, I decided to take a stance.

One early morning, standing in front of the mirror, I took a deep breath and put on a purple button-up shirt. And here’s the kicker—I tucked it into my jeans.

Walking into school, I felt like the gunslinging, zombie fighting Rick Grimes.

I met up with my friends and was immediately met with a phrase that has stuck with me to this day.

I was mortified. Playing it cool, I later dashed to the locker rooms to put on my plain white t-shirt.

For the rest of the day, I walked with a figurative cone of shame over my head.

These little happenings continued to take place throughout most of my high school tenure. The difference, however, was that they stopped phasing me.

Honestly, I attribute this to my favorite rock stars of the 1960s and 70s, Mick Jagger and Freddie Mercury, in particular.

Incidentally, they were two of the most controversial icons of their time, known for turning heads by appearance alone and redefining the term masculinity.

I started to take their sense of rebellion and apply it to my style.

At cross country practice I would break out the short shorts that went up to my ass. At first, it ruffled a few teammates’ feathers.

Guys weren’t supposed to wear shorts of that length. Those were for girls! But eventually, I became known for my quirky sense of style, and short shorts became a team trend.

In society, it seems that there is a stigma against men who take the extra time to put thought into the way they appear.

Assumptions are made, thoughts are had.

Putting extra time into looking a certain way doesn’t make me less of a “man” in societal terms.

Hell, isn’t wearing a pair of pink shorts out of the comfort of one’s home manly enough?

Of course, going against the grain is always going to raise a few eyebrows.

The clothes I put on are a mark of who I am.

The archetype of a man is a complicated subject.

But let’s hear it for the guys who rock the pink shorts, too.