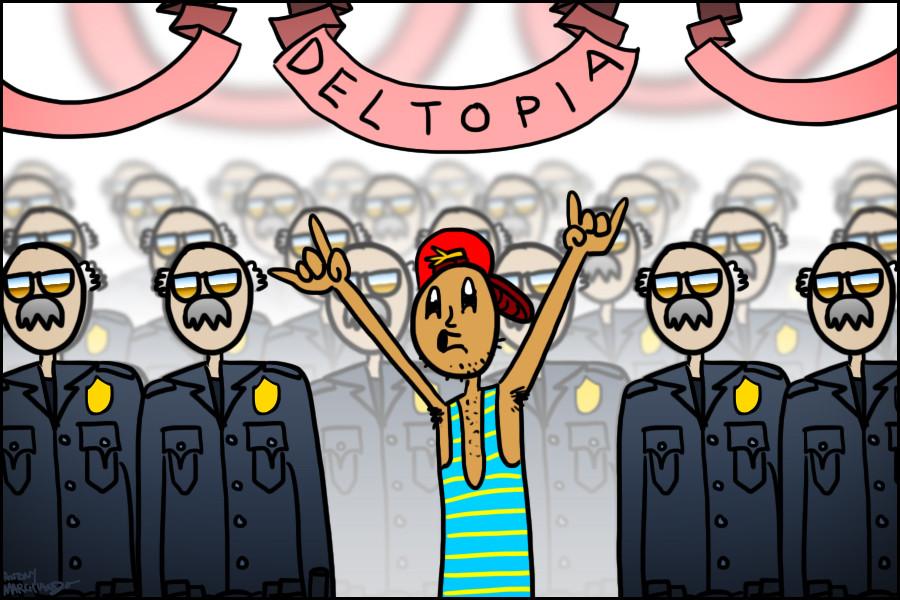 With the bitter memories of riots, tear gas and broken glass still fresh in the minds of students and law enforcement of Isla Vista, everyone could collectively agree that something needed to change before Deltopia 2015.

After hearing about everything that happened, or didn’t happen for that matter, I’m not so sure there was much to be missed. At first, it seemed nearly impossible to ask thousands upon thousands of party-driven college students to refrain from loud music, underage drinking and hosting large gatherings.

Sobriety checkpoints were enforced, the beaches were closed, and police descended upon Isla Vista the first weekend in April with unflinching determination. And, thankfully, all of the precautionary measures seemed to work. While some may have preferred a wild, riot-filled celebration, Deltopia proved to be a relatively tame celebration this year and still turned out over 10,000 people in attendance.

This was not at all a coincidence. With over 300 police officers patrolling the streets, a several special measures were enforced to ensure that anyone who created even the slightest bit of a disturbance would be leaving Santa Barbara with an arrest record. Though it may have appeared to be tad excessive, it may have actually been exactly what we needed.

Despite the beautiful, sunny Southern California weather that would have otherwise made the area a mecca for party-goers, it was actually quieter than a normal I.V. weekend. The police presence and complete lack of parking made the area very uninviting. People looking to park their cars had to depend on the kindness of their friends, as most seemed to have a better chance of winning the lottery than finding parking on the streets.

This lack of parking opportunities was only one of the many ways law enforcement deterred visitors from attending Deltopia. Many local businesses such as Camino Real Marketplace banned extended parking. UCSB put up fences around its properties, including public dirt areas that are normally utilized for parking, and the university would not sell on-campus parking permits to anyone who was not affiliated with the school itself. With all of these barriers set in place, it is incredible that these so-called outsiders were even able to make it to the Spring Break celebration.

Another major deterrent was the overwhelming police presence, both in cars and on horseback. If anyone had even the thought of creating chaos, they were quickly met with several badges and police uniforms in their neighborhoods.

These police officers would literally sit at the various entrances to I.V. and hand out tickets to people for any type of driving infractions. Several people were pulled over for failing to come to a complete stop at a stop sign. I heard someone saying people were complaining in the street, upset about a ticket for 500 dollars they had just received, and who could blame them? Some were also taken into custody for alcohol related offenses, such as underage drinking and illegal transportation and sale of alcohol.

Though people partied on their front lawns during the day, Del Playa was fairly quiet. There was music playing, of course, but not enough to draw large enough crowds that would have subjected the homeowners to a 500-dollar fine and festival ordinance.

There were girls wearing bikinis, and guys looking at them, but honestly there was no real rowdiness even as the day turned into evening.

More people did arrive at night, and it was obvious that many were not local. Some did not look like college students and made it known they were from out of town. People not from the area walked up and down the streets looking for something to do while locals partied with their friends. This was due in part to the festival ordinance that made it clear that outsiders were not welcome.

Though Deltopia was not as crazy and riot filled as in previous years, there is something to be said that county officials, the police, and USCB can work together to make a problem-free celebration out of a normally insurmountable problem.

Keeping it local seems to be the key, and law enforcement will most likely continue these ordinances and possibly more in the years to come. Who knows? Maybe next year everyone will just wait for Coachella instead.