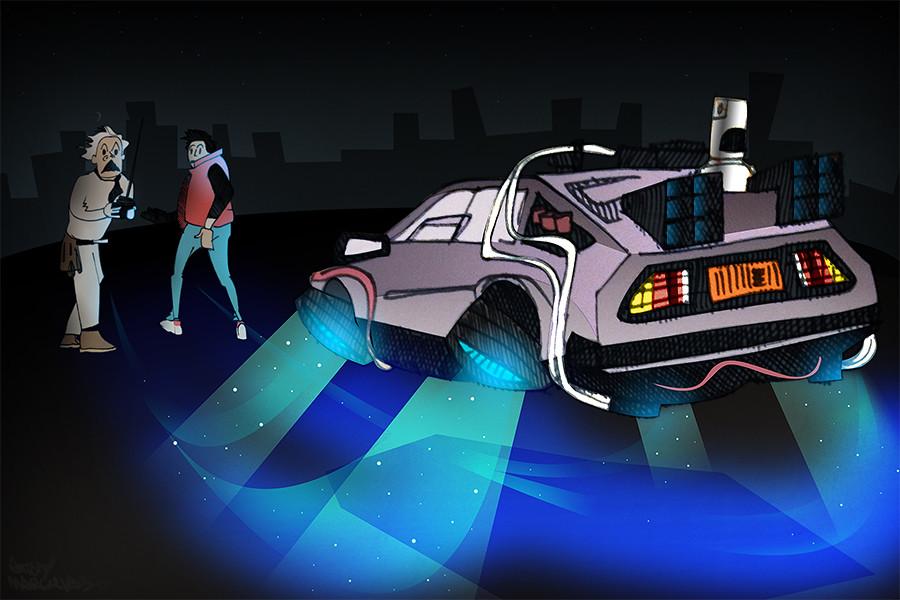 As Doc Brown said in ‘Back to the Future,’ “Roads? Where we’re going we don’t need roads.”

It’s 2057. Taxis are in the sky, flying cars are whizzing by and doctors are speaking with their patients through the mirrors in their bathrooms.

It’s not a far stretch to think this way. The Smartphones in our pockets are actually smarter than the Orion Spacecraft.

Michio Kaku is a futurist and theoretical physicist currently traveling around the United States lecturing about his new book, “The Future of the Mind.” The ideology behind this is directly related to Moore’s law, which states that computer power doubles every 18 months, while the costs to produce the power is cut in half.

Kaku recently spoke at the Granada Theatre in Santa Barbara. The physicist spoke about the advancements of space and energy and how our cell phones will be able to print out directions to the store and show us holograms that speak to us, more than Siri already does.

The technological capabilities that sent us to the moon weren’t even as smart as the Candy Crush app on our iPhones.

In a recent article published by CNN, “driverless pods” will rule above the buildings and allow for very accessible transportation, going with their slogan, “a taxi for the sky.” SkyTran is a system of elevated Personal Rapid Transit (PRT) that is a part of the NASA Space Act company that is currently working on the future of mobility, priding themselves as green and cost efficient.

Many people deny this sort of quick progression of scientific advancement but the truth is it’s inevitable. If Moore’s law continues to remain, one can only see these developments as nothing other than the future happening right in front of them.

While it may be uncomfortable and especially unfamiliar, we can look back in time and see how ‘futuristic’ we have already become. From warfare advancements to solar powered energy, we as a species are progressing naturally as technology grows exponentially.

Futuretimeline.net is a website dedicated to explaining what the next several decades will look like, using real agendas and incorporating nature and the weather to develop a profile that might give some hindsight into the foreseeable modern world.

This website states that in 2053, Moore’s law will have reached “stunning new levels.” In 2053, genetically engineered ‘designer babies’ will be available for the rich. In 2054, rainfall will increase 20 percent and year 2059 will be the end of the “oil age.”

The United Kingdom is also in the race, seeking out advanced methods for the next and greatest thing. Just this month they approved driverless cars. Originally, the UK wanted driverless cars by the end of 2013 but due to restrictions and regulations, they had to push back.

In Kaku’s lecture he spoke about the medical achievements that are going to happen in the next few foreseeable decades, such as doctors being at your fingertips and microchips inside toothbrushes to check for gingivitis.

He believes futuristic predictions began with trying to understand the universe. With the invention of the telescope, we are able to debunk the mythology of the world and what is outside of it. Kaku says the greatest invention of the human mind has been the MRI machine. Imagine what humans will be capable of in a century.

The ideas and predictions of Doc Brown might have been just a few decades shy but now they are blooming into reality.