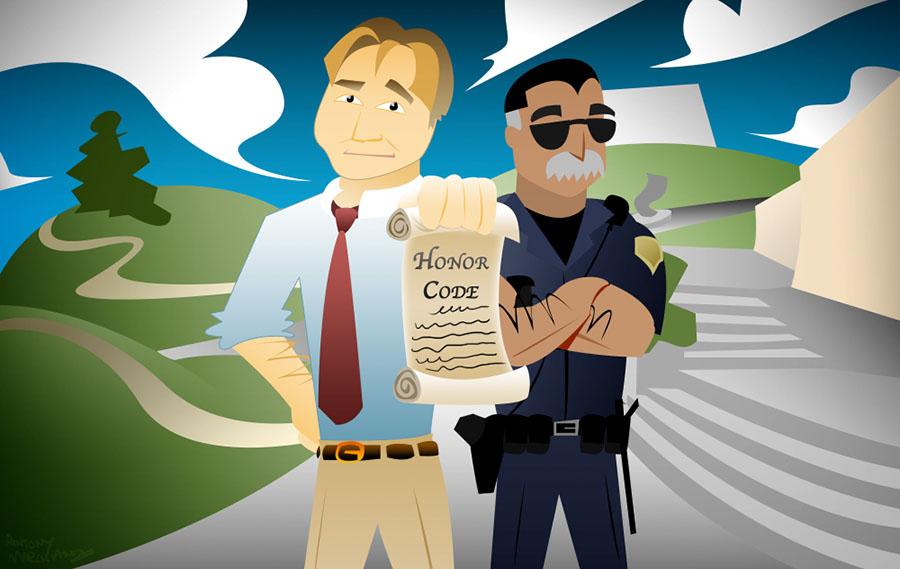 When doing this, college officials cited the revised Administrative Policy 5500. In Point No. 2, the policy states that “assault, battery, or any threat of force or violence upon a student or college personnel” constitutes “good cause” for discipline that could result in the removal, suspension, expulsion or other sanctions.

On Sept. 3, Herbert Wells Jr. was arrested by SBPD and charged with raping two women off-campus. The college was notified and Wells, a newly registered City College student, was suspended.

The Channels editorial board appreciates that the college is trying to keep us safe by implementing the new policy. However, we feel that administrators have a lot more work to do notifying students of the new and dramatic change. We also believe the college needs to put more than one person in charge of troubled students’ fates.

When students register for classes, there is small box, the college’s new Honor Code, that they must check that says, “I agree to the above terms.” But most students don’t read through those terms and don’t fully understand what they are agreeing to. We editors admit that we don’t even remember reading through the code or checking the box.

When we clicked, this is also what we agreed to:

“…Students should act honorably and responsibly in all aspects of life, both on-and-of campus… The Honor Code is binding on all students and applies to all phases of student life… [Students] shall be subject to disciplinary action for behavior that discredits themselves or Santa Barbara City College.”

Partee is aware that students will experiment—and that may lead to bad choices given the wrong circumstances. But harm presented to those on campus is not taken lightly nor is it considered for a slap on the wrist.

In an interview with The Channels, Partee said, “My job here at the college is to assure that students that come here are safe and they can get an education in a safe environment.”

His integrity is admirable, and we appreciate it. However, we feel that putting this much power in one person’s hands in a formula for trouble.

The lines between good and bad for students are too blurry. How can one person judge and carry out the discipline for every out-of-line student?

The Santa Barbara Police and Sheriff’s departments present Partee with a list of off-campus student crimes. He then goes through the list and decides if they are worth taking action or not.

According to Partee, the only thing that will get students suspended is if they do anything that is an “immediate threat” to the campus community. He said he will not suspend a student for getting a DUI or being arrested for a misdemeanor, such as a Minor in Possession charge.

When the Editorial Board sat down to discuss this issue, a list of questions arose.

We found many gray areas with which we were uncomfortable.

When students are referred to Partee, they have 72 hours to appear so he can make a decision regarding their discipline. If students do not appear, Partee decides their fate based on the information he has at hand.

If students feel their discipline is unfair, then they do have the right to appeal.

College is the time when we learn to grow up and support ourselves. We learn to be responsible. We realize the things we do have potential consequences.

This community has been through a lot in the past year. Everyone is hyper-aware of any threats or danger posed to us and people we care about.

Let’s tackle threats as the strong community we are and not put the weight of the college on one man’s shoulders. Instead, a committee of college officials, perhaps including the student body president, should be deciding discipline instead of one person.

The views and opinions in this Editorial are those of The Channels Editorial Board and not of the whole City College student body.