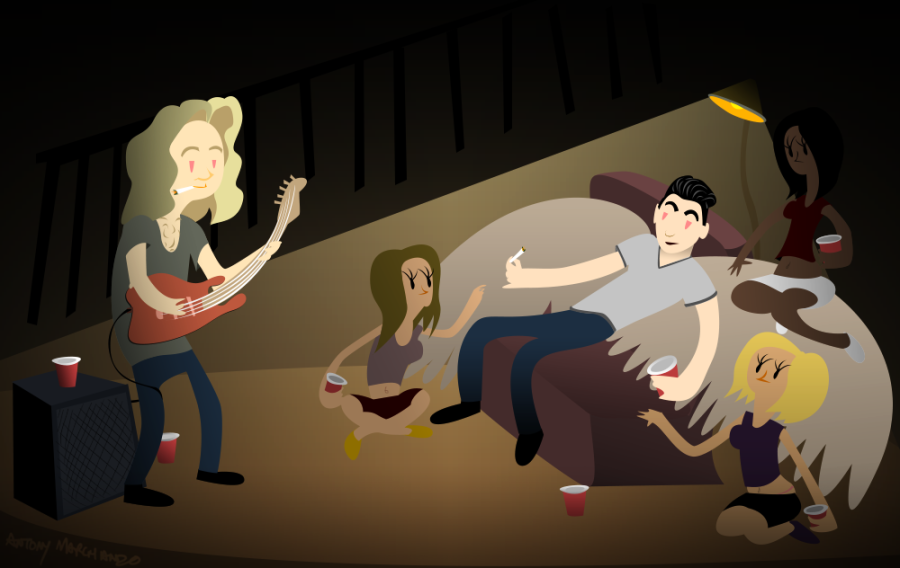 I turned to run out to the front of the house along with every other blubbering teenager.

“No, don’t run out there. Just come on, quick, get in here!” shouted the host of the party.

The birthday girl rushed us into a small garage; following close behind me was my childhood idol, Drake Bell, along with his friends.

I was at a stranger’s 17th birthday party somewhere in North Hollywood.

Now you’re probably wondering how I got myself into this situation, and the explanation is simple:

I was given a lot of free reign starting at the age of 13 and they allowed me to take public transportation and explore the city on my own. My parents trusted me to be safe, and while most of the time I was, my independence threw me into unusual situations almost everyday.

This night in particular was one of those unusual situations.

I was sitting on the subway, with about 10 miles left on my trip to North Hollywood. A peculiar smell filled the air and I could only describe it as subway and filth.

My friend had sent me an address to a party, but I’d have to go alone.

I stepped off the subway and started my 3-mile walk, glued to the directions on my phone.

After a few interesting interactions with some questionable people, I arrived at my destination.

I was at the age where my voice was still regularly cracking, and most of the guys there towered over me and, not to mention, could actually grow decent facial hair.

I walked up to the first group I saw, five or six guys all huddled around a Ping-Pong table.

I introduced myself immediately and struck up a good conversation, in which one of them explained to me that it was a girl’s 17th birthday party. She was an up and coming Disney actress, but I didn’t recognize her.

My eyes went straight to whom she was with. There, standing right next to the birthday girl, was Drake Bell.

Possibly one of my biggest role models, and one of the coolest Nickelodeon stars of the 90’s, was standing a mere 10 feet from me. I resisted the urge to belt out the theme song from his show, Drake & Josh.

I tried to subtly nod my head in his direction so my new posse could see.

Clearly, they had no childhood.

Cops had begun to break up the party and we had all been rushed into the garage.

The lights flickered on to illuminate a set of musical instruments in the center of the room, wired for sound.

Drake Bell and his band members each placed themselves in front of an instrument.

He smiled and gestured at the crowd, “You guys may know this one.”

The events that followed can only be described as reaching nirvana.

The theme song for Drake & Josh filled the garage, and a wave of nostalgia hit my body. I was 10 years old again, sitting in my living room watching Drake & Josh—except this time I had a beer in my hand.

Soon enough, the song was over and Drake shouted the one thing I never thought I would hear my childhood idol say.

“Then Drakey gets a beer!” I shouted back.

I Katniss Everdeen’d my way up there and volunteered as tribute. I happily grabbed him a beer and sat down with him. We talked as I watched him switch over to the drums and piano between songs, and then back to the microphone again, for 2 hours.

We talked about the show, his musical talent, his band, and more for what felt like forever. I had become friends with my role model in the last way I could ever imagine. My phone alarm went off at 2 a.m.. It read: “DUDE LAST TRAIN IN 20 MINUTES”. The station was about 3 miles away.

I bolted out the door and in what seemed like seconds later, I stepped on the train heading home, panting, but with a grin filling my face. This had been one of the best nights of my life, and I had met my role model.

It’s moments like these when you realize how thankful you are for what you have.

What I had then, and still today, is a great set of parents. They let me explore the city that I thought I knew so much about, and trusted me enough to let me venture and grow. Without that freedom, I would never have had that night.

I wouldn’t have had any of those kinds of nights.

The familiar stench of the subway wafted up into my nose. But this time I didn’t flinch—I welcomed it.