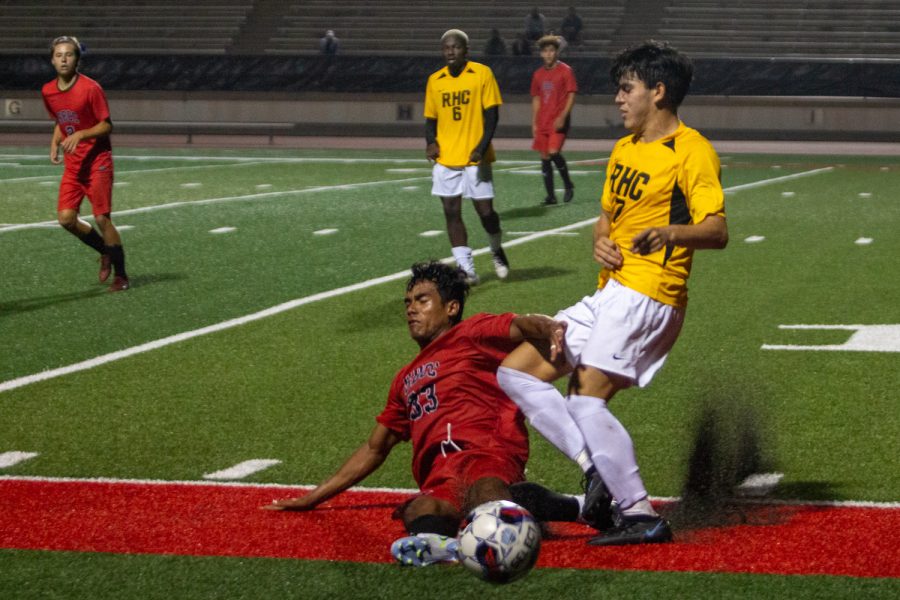 Both teams played an aggressive game from the start with multiple attempts at goal. The game took a turn with 25 minutes left in the first half when Vaquero’s forward player, Lukas Lovgren, was fouled in the penalty box.

City College lead scorer, Bart Muns, took the penalty kick, hitting it straight into the goalkeeper. The goalkeeper couldn’t keep the ball in his possession, making every player on the field scramble. Muns found himself with the ball again and shot a rebound, ricocheting off a Rio Hondo player and into the net. This was his fourth goal in four games this season.

“I was lucky that it went in,” Muns said.

Rio Hondo responded to this with an increase in energy. City College’s defense worked hard to prevent Rio Hondo from scoring during the first half.

During the game, City College made sure to be very communicative while on the field. They let each other know if someone was approaching them, if they had time and who was open. One of the loudest players on the field is Vaquero’s goalkeeper, Will Haberfield. He was constantly talking to his teammates from the goal.

“It’s my responsibility from the back, I see everything,” Haberfield said. I’ve got to communicate.”

The Vaqueros focused on passing the ball to their wings to create open space and time. This made it easier for the players to keep possession of the ball and make smart plays.

With 18 minutes left in the game, Rio Hondo scored, tying the game 1-1. The intensity and aggression from both teams immediately rose, as both were fighting to take home a win.

City College made sure to move the ball quickly, with one-touch passes, wasting no time. The Vaquero’s had many shots at goal during the last 15 minutes but had trouble finishing those shots.

“We had about four or five chances on goal and couldn’t put it in the back of the net,” Assistant Coach, Alex Zermeno said.

Although the Rio Hondo defense didn’t make it easy for City College to score, the coaches and players know what they need to practice to find their tempo.

“They had some good defenders, but in the end, it’s getting the rhythm,” Lovgren said. “We’ve only played four games. Us forwards, we have good chemistry and we’re gonna start getting more goals soon.”

City College is still trying to find its groove this season when it comes to formation and flow. “We went with a completely different shape today after Fresno’s game,” Zermeno said. “I think it’s still new to them. We saw good things in the shape and saw good things going forward. It’s just fine-tuning the little things and getting the team more comfortable.”

The Vaquero’s next home game will be against Bakersfield on Tuesday, Sept. 20 at 7 p.m.