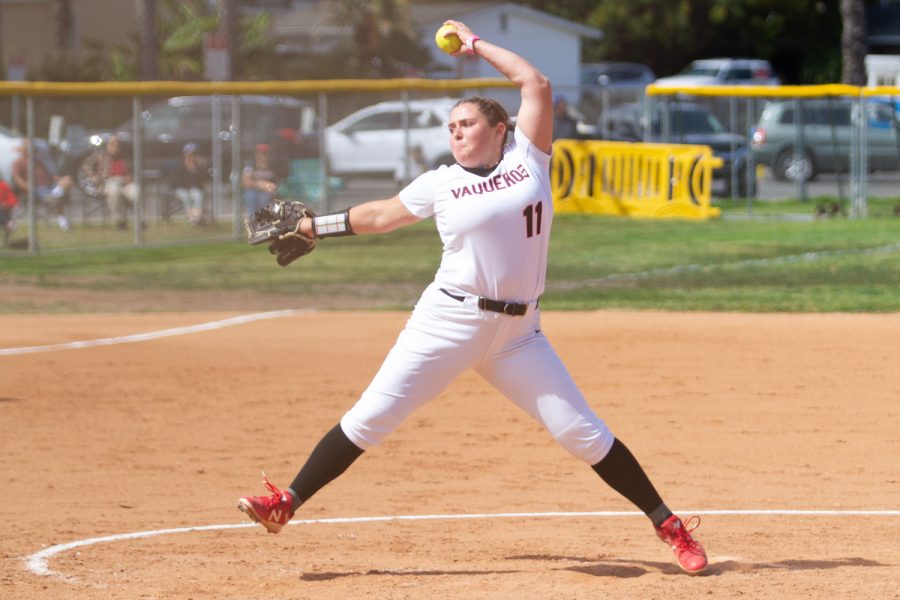 Paige Powell throws a pitch during her final home appearance for City College on Thursday, April 21 at Pershing Park in Santa Barbara, Calif. The Vaqueros were no-hit by Ventura College in a 13-0 loss.

It was the last Pershing Park appearance in the red, black and white for sophomore outfielder/pitcher Paige Powell, a San Marcos High School graduate who has been with the program since the 2018-19 season.

“It’s such a good team and such great people to be with,” Powell said.

“I’m so thankful for everyone; the trainers, my counselor JoAnn [Graham], the coaches from coach [Justine Bosio], my first coach, to now coach Jas …City College is so hard to leave.”

Powell has been part of the team while also taking classes at San Francisco State University. This was made possible due to eligibility decisions by the NCAA and CCCAA in response to the COVID-19 pandemic.

“She’s someone who loves softball and you can just tell every time she’s out here she’s having fun,” head coach Jasmyne Perry said. “I hope that a lot of these girls look to and understand what it takes in attitude and being a teammate, that’s what [Powell] embodies.”

After starting 29 of City College’s 34 games in the circle as a freshman in 2019, the local lefty made all 10 of her pitching appearances this season in relief. She was called upon to replace starter Lauren Indermuehle in the top of the fourth inning.

Ventura College tagged Vaqueros pitchers for 11 hits, including three home runs to put the game out of reach in the later innings. All the while, Pirates ace starter Ashlyn Flinchum confounded City College hitters with 10 strikeouts and four walks.

Shortstop Alyssa Perez was the only player to reach base twice for the Vaqueros, drawing walks in the second and fourth innings. City College loaded the bases with two outs in the fourth, but popped out to end the threat.

“[Flinchum] was really effective…her ball had more pop on it than we’re used to seeing,” Perry said.

It’s the first time City College has been no-hit since March 26, 2019, at Bakersfield College. The loss drops the Vaqueros into a tie for fourth place in the Western State Conference-North with Cuesta College.

“Honestly, if we’re not winning, at least they’re enjoying themselves,” Perry said. “We want to win, we always put in the work, and something that I’m proud of them is that they keep showing up and having fun.”