Vaqueros rally past Allan Hancock 6-5, baseball is 2nd in WSC-North 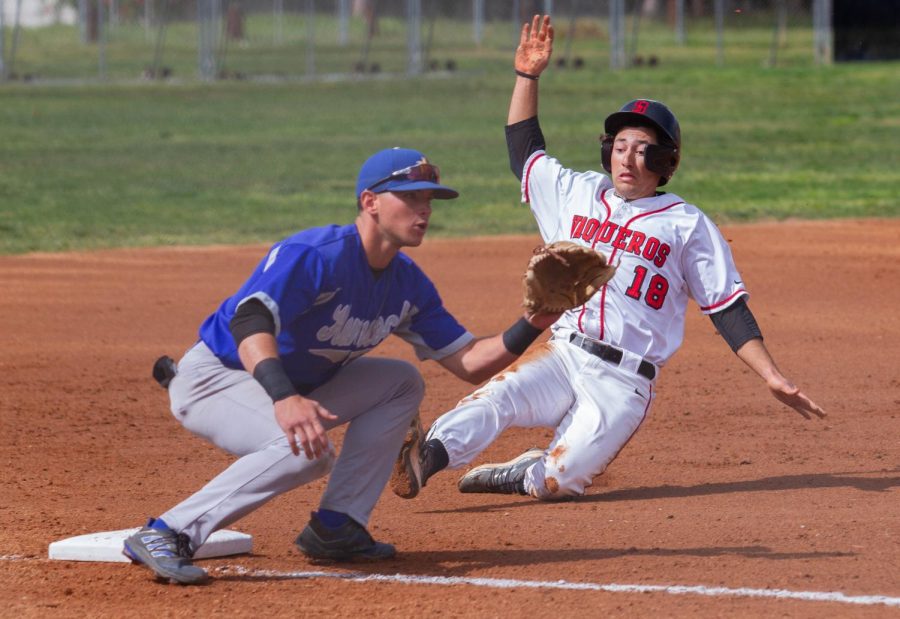 Second baseman Gavin Haimovitz, No. 18, steals third base after a wild pitch on Tuesday, March 15 at Pershing Park in Santa Barbara, Calif. Haimovitz scored first in the game for City College.

The City College baseball team went back and forth against south No. 4 Allan Hancock College and ended up winning 6-5 on Tuesday afternoon at Pershing Park.

The south No. 19 Vaqueros’ record is now 13-7 overall and 6-1 in the Western State Conference-North.

The Vaqueros started slow at the plate and only had one hit through the first five innings. The Bulldogs scored the first run of the game in the third inning, taking a 1-0 lead.

Hancock starting pitcher Matthew Gonzales’s slider kept the Vaqueros from getting on base.

“Their pitcher had us pretty confused with his off-speed pitches that he was throwing strikes. It took us a while to make an adjustment,” head coach Jeff Walker said.

The Vaqueros brought left-handed pitcher Aidan Garza in for the top of the third inning. Garza threw four innings and gave up four runs while striking out three batters.

The game’s pace changed in the top of the sixth inning when the Bulldogs were up to bat with one out and a runner on first base. Joey Freitas hit a line drive to right fielder Hunter Call, who caught it and threw the runner out at first for a double play getting the Vaqueros out of the inning.

“I think it was a momentum change. Overall, it was a team win,” Call said.

The Vaqueros’ bats started heating up in the sixth, as they had three hits in the inning. Both Call and shortstop Gabe Baldavino started off the inning with doubles to left field. Baldavino brought in Call to tie the game.

Then, center fielder Matty Fung had an RBI single up the middle, which brought in Baldavino from second base and gave City College a 2-1 lead.

The following at-bat, third baseman Gavin Haimovitz reached on a fielder’s choice then made his way to second base following a pickle play between home and third base. Then Nicholas Seyler came in and notched a pinch-hit single to left center, scoring Haimovitz and pushing the lead 3-1.

“Clutch hitting was big,” Call said. “We came up big in spots with guys in scoring position.”

After falling behind, the Bulldog’s offense came out swinging and took the lead again 4-3 in the top of the seventh inning. City College went scoreless in the bottom of the inning.

However, according to Call, their rallying energy kept them going.

“This whole team is very gritty, and it doesn’t matter if we’re behind by eight or up by two, there’s constant energy. We do a good job staying positive throughout the game,” Call said.

Fung led off the bottom of the eighth inning with an opposite-field double to right. Fung then scored on a wild pitch to tie the game 4-4. Next, Carson Cahoy brought in Haimovitz with an RBI single. Then, with bases loaded, catcher Tyler Imbach walked to bring in Pierce Blaney to score the final run for the Vaqueros.

City College’s third and closing pitcher of the game, sophomore Jake McBride, took over the game giving up no runs and allowed just one hit, helping the Vaqueros win and claiming the W in the scorebook.

“We have two more games this week against them, and we just want to work on making adjustments sooner offensively at the plate and do what we do,” Walker said.