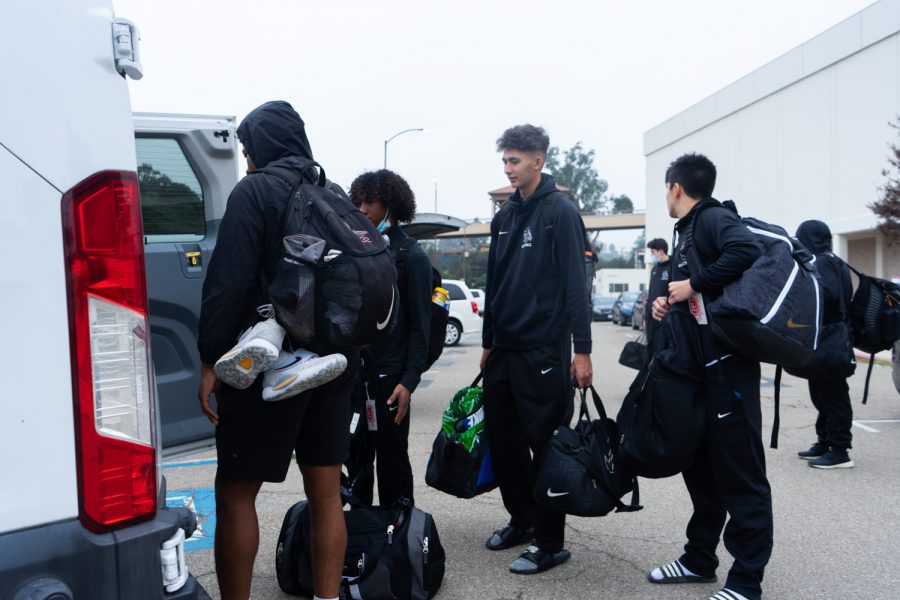 City College’s men’s basketball team load up the vans as they prepare to leave for a Monterey tournament on Dec. 2 outside of the Sports Pavillion at City College in Santa Barbara. Many basketball teams at the CCCAA level play most of their non-conference games in three-day weekend tournaments.

There’s a reason why the “road trip” movie is a staple in Hollywood.

The characters get to know each other better over the course of their travels and end up improving themselves while learning along the way.

What works on the big screen also works on the hard court, as the City College men’s and women’s basketball teams both participate in several multi-day tournaments every season for the majority of their non-conference games.

“We always go to the tournaments that have the top teams in the state,” said women’s head coach Sandrine Krul. “Sometimes that will hurt us in our win-loss [record], but then by conference, we’re ready to go.”

Both programs are on the road this weekend, with the Vaquero women participating in the Toys for Tots tournament at Allan Hancock College. The men’s team has traveled up the coast to compete in the Monterey Bay Classic tournament at Monterey Peninsula College.

Whether it be the time spent together traveling, between games at the host school or at the hotel and in required study halls, tournaments give the teams valuable time to build camaraderie.

Though sophomore Brycyn Gossett has tournament experience from playing AAU basketball while growing up, the compact schedule of three games in three days underscores the need for the team and individuals to be ready.

“The biggest thing is preparation,” he said. “As long as we’re able to get enough film in a timely manner and to practice out there, I think I’m able to have myself in a good mindset to execute the things I need to do.”

Sometimes tournament locations are close enough that the team can drive there and back every day, as the women are for the Hancock tournament, which adds a different challenge.

“In the vans, we get to bond and collect ourselves together there. Once we’re off the van and on campus, we know it’s go-time,” freshman Janet Arias said.

Both programs have a long tradition of hosting tournaments at City College.

Krul noted some of the challenges in hosting a tournament at City College, such as having only one gym in the Sports Pavilion and needing to displace certain P.E. classes.

Yet all of the work coordinating with staff and facilities is worth it for the programs to have 12 games over three days in Santa Barbara.

“It’s a great experience for student-athletes at the community college level,” Engebretsen said. “It’s a really good, energetic vibe in the atmosphere sitting in the stands and watching other teams play in our gym.”

The Vaqueros men’s team fell 64-54 to No. 30 Monterey Peninsula on Thursday, Dec. 2, and are facing Diablo Valley College (Pleasant Hill) on Friday, Dec. 3 at 3 p.m. Also on Thursday, the women lost to Long Beach City 88-46 and will play Mission College (Santa Clara) on Friday at 1 p.m.