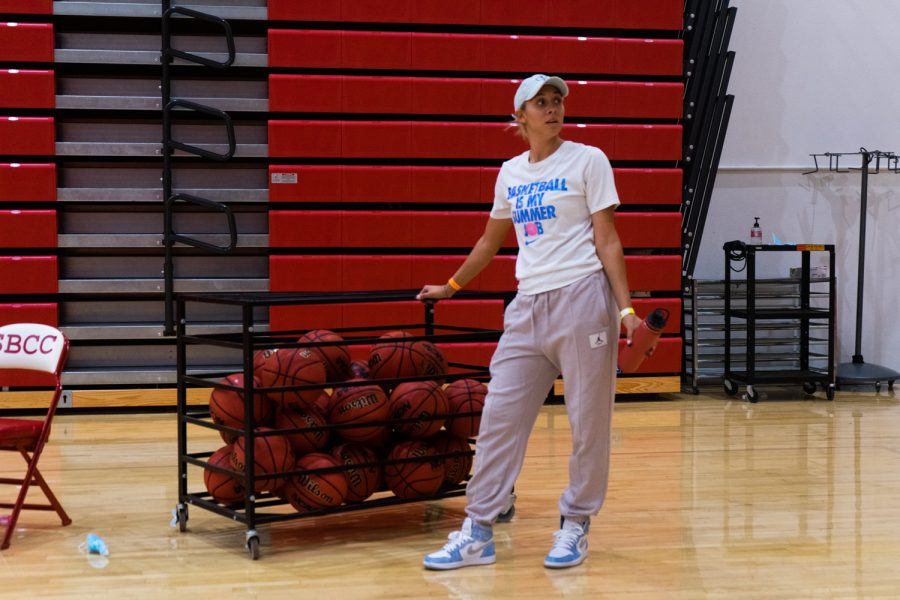 Assistant Coach Keani Albanez makes sure all the basketballs are accounted for after practice on Dec. 1 at the Sports Pavilion at City College in Santa Barbara, Calif. Albanez is the first woman to be an assistant coach for the City College men's basketball team.

On Sept. 2, 2020, Keani Albanez became the first woman to be hired as an assistant coach for the City College men’s basketball program.

In the history of the California Community College Athletic Association there have only been a few female coaches who have been assistants for men’s basketball programs.

As times change women have become more prominent in leadership roles and the Vaqueros men’s basketball team has embraced the cultural shift.

“I think it’s huge for guys, especially young men, they are being molded to learn to take direction from a woman,” Albanez said. “For them to learn that at this age is going to prolong them in future.”

Head coach Devin Engebretsen said what drew him to hire Albanez was her knowledge and skill of the game as well as her energetic personality.

“Keani’s from Santa Barbara and she’s a division one athlete,” he said. “She played at Gonzaga which is a top 25 program in America…I knew that she would come in and have an immediate impact in terms of skill development.”

Albanez works with the team as a whole, but also with players individually to help them develop their skill and knowledge of the game.

“Working with coach Albanez has been great,” freshman Jaelen Bates said. “She’s not [only] great in practice, she also helps me outside of practice…She’s been helping me with my game and giving me confidence.”

Engebretsen said he believes in the advancement of female coaches, so when Albanez expressed interest in coaching on the men’s side he wanted to figure something out.
“Having a female presence around our team helps show our young men that powerful female voices are important and our guys are learning a lot from her, not just in basketball, but in academics and also in life,” Engebretsen said.
“It is important that they understand as they grow up…they are going to have to take direction from [women], so it’s important that they are learning it now. Not all of them have that in their lives.”

Albanez noted all the players are very respectful and she “wouldn’t take anything less.”

“I think women are becoming more involved in boss-like [roles],” she said. “There’s nothing else that’s different, my caliber is the same, they treat me just the same.”

Bates described Albanez as a “basketball head” because of her knowledge of the game and said he wants to learn more from her to implement into his own game.

“Not only can she hoop, but she knows what she’s talking about, so I just want to get on her good side,” he said.

Albanez’s basketball IQ helps her when coaching, and her on-court ability allows her to get involved and push the players in practice.

“She’s challenging, she makes our guys work hard and I really believe they are seeing the benefits of her coaching and they also love being taught by her,” Engebretsen said.

He also highlighted how pumped she gets about their development and will challenge them to shooting contests. It creates a fun environment, but also pushes the players to do better because some of them still can’t beat her.

“I think this program is special and I am thankful that Devin has given me this opportunity and opened doors, I think, for the rest of the community colleges within this area,” Albanez said.

“I’m thankful that this group of guys have allowed me to step in that role for them and be there for them.”