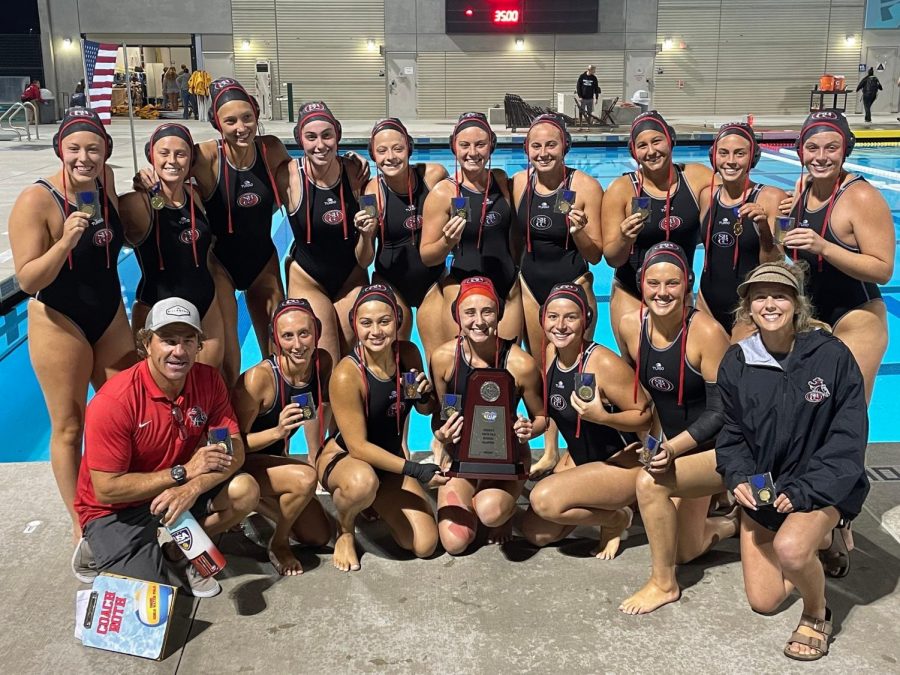 The City College women's water polo team celebrates with the CCCAA SoCal Regional Championship trophy at Southwestern College in Chula Vista, Calif. on Saturday, Nov. 13. The Vaqueros defeated Fullerton College 10-9 in the Regional Finals to advance to the State Championship.

The No. 2 City College women’s water polo team advanced to the CCCAA State Championship for the fourth time in the program’s history from Nov. 19 through Nov. 20.

Although the team fell 6-5 in the championship game to North No. 1 West Valley College, it was the third time the Vaqueros (30-7) played for the state title in school history.

“We’re the second-best team and I don’t think that is anything to be upset about or frown about,” head coach Chuckie Roth said. “I think my girls should hold their heads high, they’re a phenomenal bunch of young women.”

To get there they beat No. 9 Citrus, No. 4 Long Beach City, and No. 2 Fullerton at the SoCal Regional Championships from Nov. 12 to Nov. 13.

On Friday, Nov. 19, the team played against North No. 2 San Joaquin Delta College in the semi-finals and won 8-6.

Then on Saturday, Nov. 20, City College went up against West Valley in the finals.

In the four meetings, City College lost to West Valley by seven, five, three and one goal(s).

Despite the defeat, the team appreciated what they achieved.
“I’m really proud of what we accomplished this weekend,” sophomore Allison Kay said. “I think even though we lost, it didn’t feel like a loss. I think our team played really well, we finished hard and we finished proud of what we accomplished this season.”
The Vaqueros won the Western State Conference for the seventh straight season, continuing their streak since the program began in 2014.

Roth mentioned how this year’s team always came ready to play, had a “never-give-up” attitude and how he was going to miss this group of girls.

“[They] overachieve in so many ways, we fell short at the end and that happens to great teams,” Roth said. “It’s just unfortunate the way it finished for us this year, but I’m going to miss this team a lot.”

Several Vaqueros earned honors for their performance during the season:

Tal also spoke about how she “really wants to say ‘thank you’ to [the coaches], we couldn’t make it without them.”

Kay, who along with Jenna Olson were the team’s two sophomores, summed it up:

“The strongest thing about our team this year [was] we had really good chemistry in and out of the water,” she said.

“Even though I don’t have 15 teammates anymore, it’s more like having 15 other family members. That was the most influential part of the season, all of us being best friends.”