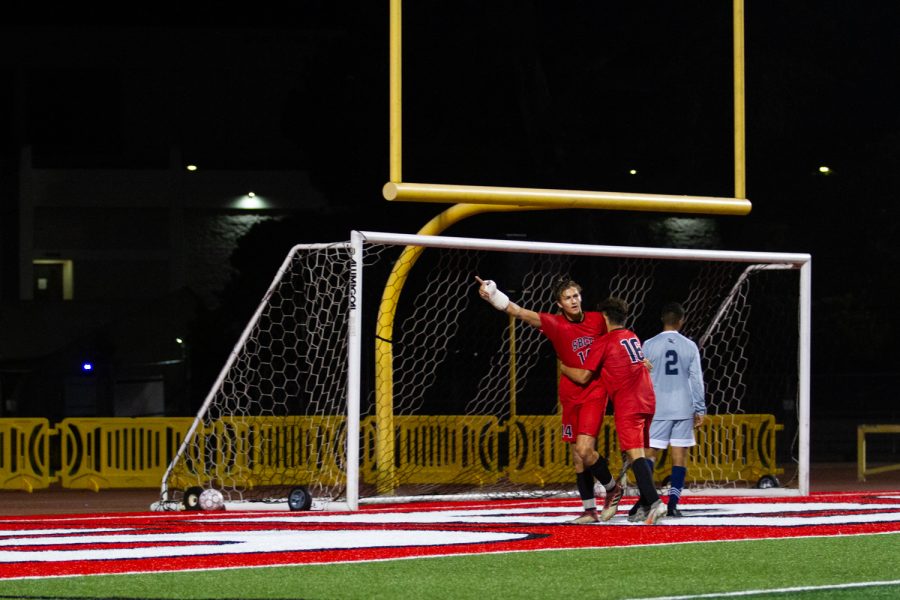 From left, Bart Muns celebrates with teammate Will Demirkol after scoring a goal against LA Mission College on Nov. 9 at City College's La Playa Stadium in Santa Barbara, Calif. His goal put City College ahead 2-1.

The No. 18 City College’s men’s soccer team took care of business in the second half, winning 2-1 thanks to a goal in the final minutes.

The Vaqueros knew they had to win this game after their loss to Oxnard last week to have a chance to finish in second place in the Western State Conference-North.

The start of the second half is when things started to kick into gear for the team.

Within the first two minutes of the second half City College had two chances that they almost put away, but were unlucky. Then in the 52nd minute, LA Mission fouled City College player Bart Muns inside the 18-yard line, giving the Vaqueros a penalty kick.

Forward Tanner Stevenson scored from the spot to give City College a 1-0 lead.

Sisterson said he “felt like that might be the goal to win it, but that wasn’t to be,” because in the 79th minute LA mission scored to tie up the game.

“At that stage of the game we had to defend very well because they looked like they were getting on top,” he said.

With the score tied and only ten minutes left, the team kept fighting and left their all on the field.

City College took 12 of their 21 shots for the game in the second half.

“Was important we have to win…for the playoffs, so we were focused, it was a tough game, but still [had confidence] and we won it,” freshman Bart Muns said.

The winner came in the 88th minute of the game when Muns received a pass from Stevenson and won a one-on-one against an LA Mission defender to break the tie.