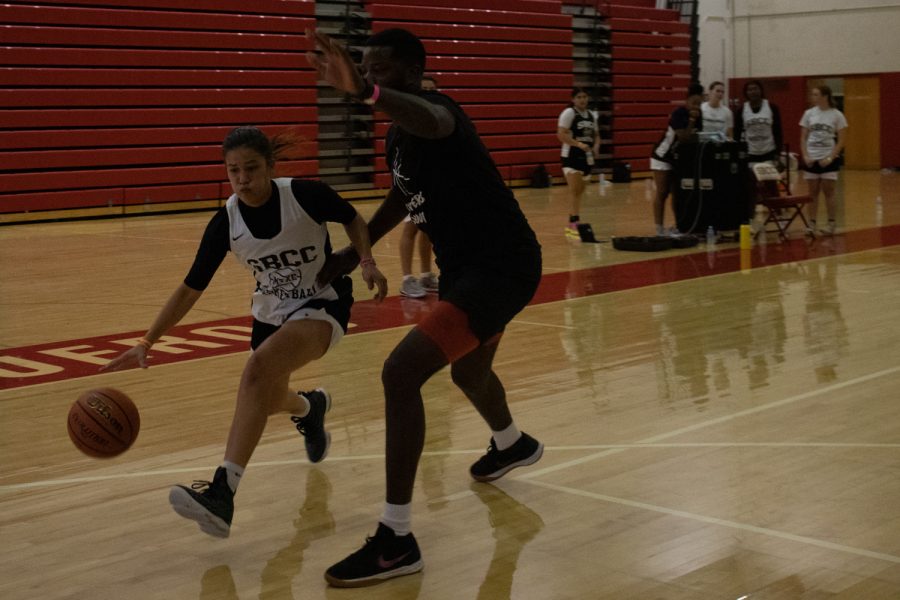 The women’s basketball team run new plays with assistant coach Joe'Randle Toliver during practice on Oct. 7 at City College’s Sports Pavilion in Santa Barbara, Calif. Toliver would stop the game in the middle of a play to correct the team and show them how to improve their technique.

The City College women’s basketball team had their mental toughness tested by the pandemic, but they’ve been putting in the extra effort to be ready for the fast-approaching season.

Sporting a roster of 15 freshmen, the Vaqueros have taken part in multiple preseason scrimmages to get their players experience ahead of their first regular season game on Tuesday, Nov. 2 at Santa Ana College.

“My goal is to play all 15 players, and if everyone gives good minutes that’s success. I don’t need a star, I need players that are going to run plays,” said 18th-year head coach Sandrine Krul.

“It feels good to be back, it really wasn’t the best having to only practice, but it helped us to see what the college experience is like,” Arias-Gonzalez said.

Knowing how close the season is has been fueling the team.

With such a youthful squad, coach Krul prioritized getting game experience for the team during the preseason. City College has taken part in three separate days with multiple scrimmage games against other California community colleges held at Ventura College.

“They need to be in games, but one thing for sure is they’re so coachable. They watch film and they schedule time to watch film with me, we just need to play games,” she said.

The scrimmages have helped the first-year players begin to make the adjustment to playing at the college level.

“You really have to push the ball [and] run [a] quick offense,” said freshman forward Trinity Scott. “Really talking and knowing your teammates and their game so you can play together as a team.”

“Getting to the areas and cutting off the drive, cutting off three-point shots, rebounding and blocking out, and running through steals after we trap are the things I’m looking for,” he said.

That energy has helped guide their goals for the upcoming campaign, including having a top defense and competing for a championship.

“We want to let people know that just because it’s a fresh new team we’re not going to back down, we’re working for this and we really want it,” Arias-Gonzalez said.

City College begins the home portion of their 2021-22 regular season by hosting the MTXE Tournament at the Sports Pavilion beginning Friday, Nov. 5.