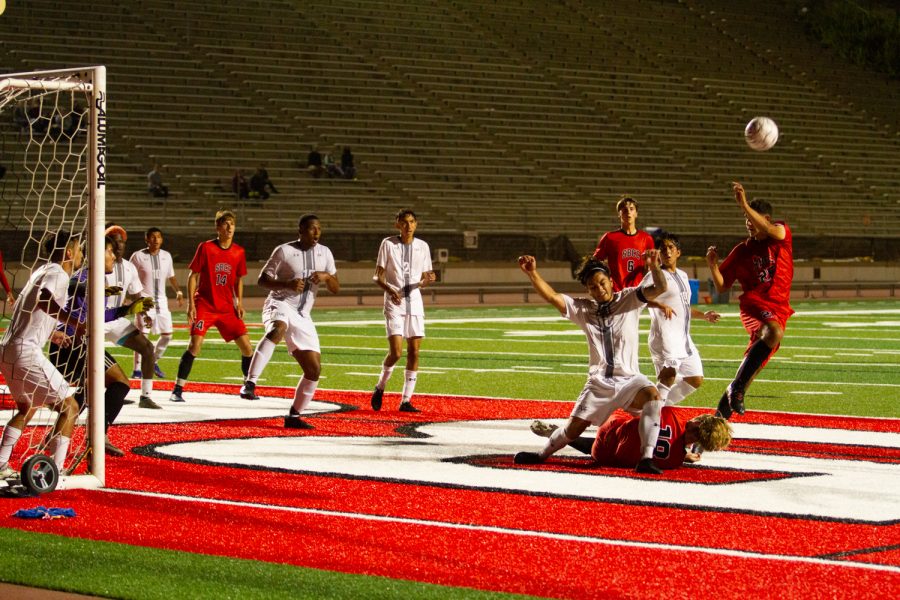 Antelope Valley and City College players collide after a corner kick during the soccer game on Oct. 7 at La Playa Stadium at City College in Santa Barbara, Calif. The Vaqueros went on to win the game 2-1.

It was a photo finish game, with the winning goal scored in the 89th minute.

City College went into this game with a record of (6-2-2) with Antelope Valley coming in at (7-2-2). Freshman forward Will Demirkol’s 89th-minute goal secured City College’s win against opponent Antelope Valley on Thursday night at La Playa Stadium.

The Vaquero’s started off strong and had their first chance to shoot in the fifth minute of the game, but missed. They then had another chance in the sixth minute but it was saved by Antelope Valley’s keeper.

Third shots a charm, scored in the eighth minute by sophomore forward number 14, Bart Muns, with an assist from number 16, Demirkol.

“I think we started off very well, very brightly, we attacked well and got the goal that we deserved,” Sisterson said.

Demirkol said the team worked hard all week. He said he has confidence in his own game lately by beating defenders and playing his best. The freshman forward also had the assist on the first goal of the game.

“I thought he did well, he did very well, he’s a very positive young man,” Sisterson said. “He’s full of confidence and that’s what you want with forwards, he plays with a lot of flair and likes to get around defenders.”

In the 43rd minute, Antelope Valley came back strong with a chance on goal. But freshman goalkeeper number 99, Adrian Gonzalez, saved the shot with a dive back to the bar to tip it over the goal.

“We’ve got a lot of technical ability on the team and we believe in each other,” Sisterson said. “[In some] circumstances the other teams got the momentum, but it’s important that we dig in deep and work hard, it’s all about attitude.”

Antelope Valley tied the game 1-1 with a goal from number 14, Fabian Duran by the 59th minute.

However, this is when Demirkol took a chance during the 89th minute, just outside the corner of the goal box, scoring and securing the game for the Vaqueros.

“It’s an amazing feeling, I’m proud of my teammates too, I wouldn’t have been able to do it without them,” Demirkol said.