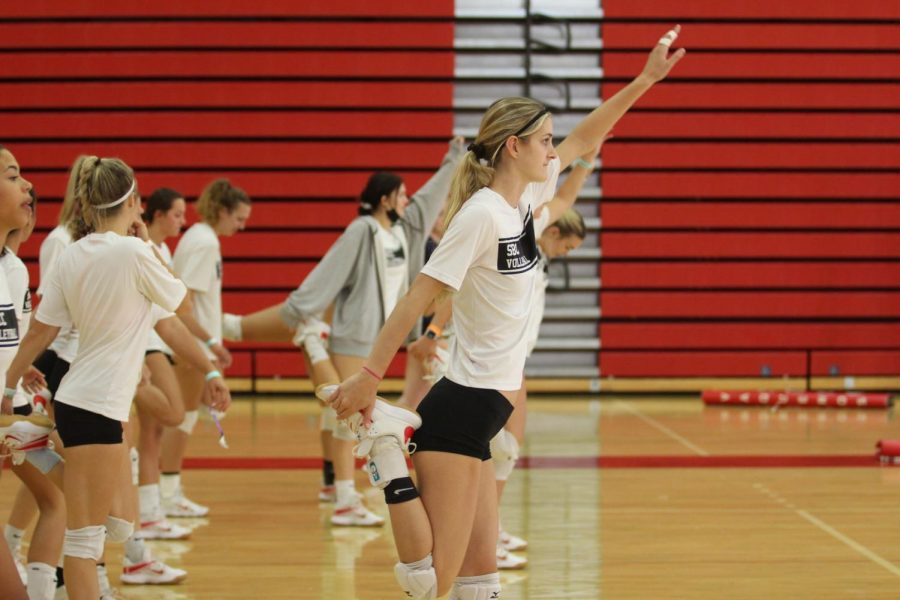 The women’s volleyball team warms up before practice on Sept. 21 in the Sports Pavilion at City College in Santa Barbara, Calif. Karoline Ruiz and her teammates are stretching out their hamstrings after doing a multitude of other stretches to avoid injury.

Things are returning to how they were before.

Students are back on campus, City College athletics are in action again, and the women’s volleyball team is ranked in the state top 10.

Off to their best start since the 2016 season, City College is currently on their second five-game winning streak while knocking off five of the seven ranked opponents they’ve faced.

The No. 8 Vaqueros (10-2) face No. 24 College of the Canyons at 6 p.m. tonight at the Sports Pavilion in their final game before conference play begins.

“My goal was to create a really hard non-conference schedule, and I feel it’s done a really good job of preparing us,” said third-year head coach Kat Niksto. “It’s setting us up in how I’d hope it would set us up in that we’ve had a lot of really strong matches against really strong teams.”

Although COVID-19 kept them off the court, team chemistry was forged over movie nights, beach trips and tie-dying shirts. That bond has translated in the return to play.

“We’ve worked really hard to build over the last year and really work towards our ultimate goal of going towards playoffs and stepping on the court and playing our game,” said co-captain sophomore Lauren Holsted.

Holsted, a libero/defensive specialist, and her fellow back row players have helped lead the transition to a potent attacking front.

“Everything starts with the pass,” co-captain freshman Emma Crabbe said. “[They’ve] done a really good job of putting the ball up in good places for me to be able to put up hittable sets for our hitters. They all call for their sets and want to be set, so I’ve got to feed them.”

Freshmen Caroline McCarthy and Bella Johnson have feasted their way to the top two spots in kills-per-set in the Western State Conference-North. Crabbe is tied for tops in the conference for assists-per-set.

“Bella is always telling me where to hit and what’s open, we’ve been able to build off of each other being in the same position. It’s at the core a really good friendship,” McCarthy said.

All the while six-foot-plus freshmen middle blocks Karoline Ruiz and Paige Rudi have helped the Vaqueros average nearly half a block more per set than their next closest WSC-North foes.

With the team’s overall focus trained on a conference title and making a playoff run, Niksto and assistants Bridget Kulseh and John Sener see the potential.

“Having those aggressive, but I think realistic goals helps motivate them,” Niksto said. “Our goal is to improve a little bit every single day, and we want to be peaking in November when the playoffs roll around.”