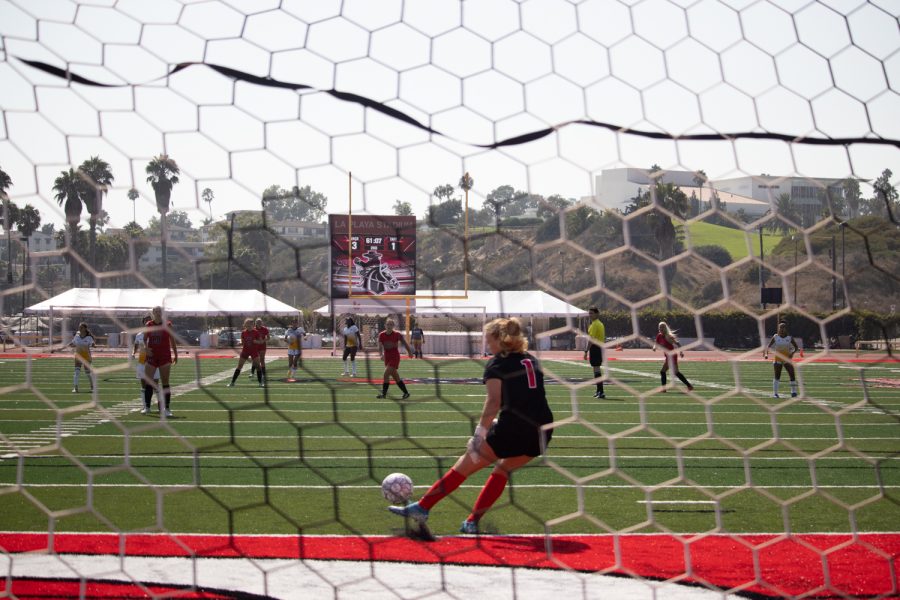 Analea Pule, center, launches the ball across the field with her goalie kick during the first home game of the fall 2021 season on Sept. 7 in La Playa Stadium at Santa Barbara City College in Calif. The Vaqueros defeated the Taft College Cougars 6-1.

With how quickly the City College women’s and men’s soccer teams started, it’s safe to say they were ready for their home openers.

The Vaqueros scored within the first three minutes in both a 6-1 victory by the women’s team and a 1-1 draw by the men’s team against Taft College on Tuesday. They were the first City College games since November 2019 to be held on the new turf and with fans in the stands at La Playa Stadium.

“It started even before the game-pregame warmup, everything was spot on,” forward Monica Pizano said.

City College (2-1-0) charged out of the gate with three goals in the first 14 minutes of the game.

Delaney Kenney opened the account in the third minute by scoring off a failed clear. Then in the 10th minute, Savannah Mohatt hit the back of the net from distance. Finally, Pizano took a feed from Julianna Alaniz at the top of the box and stuck to the top left corner for the 3-0 lead City College carried into halftime.

“They were buzzin’, and we knew as soon as the whistle went that they were up for it today,” Sisterson said.

Pizano scored her second and third goals of the day in the 80th and 86th minutes, knocking home a loose ball after the Taft keeper mishandled a free kick by Kenny and then cooly finishing a cross box pass from Theresa English.

Pizano noted it was her first three-goal game since high school, saying “it’s been a while, it’s a good feeling to score a hat trick.”

The next women’s soccer game is Friday, Sept. 10 at 2 p.m. at La Playa Stadium against Fresno City College.

It was a fast start and then an anxious ending, but at the final whistle, the Vaqueros and Cougars remained knotted.

“There’s a lot to build on, and it was a good performance against a team that’s won four games,” said head coach Sisterson.

City College (1-0-2) converted in the first minute of the game on a set-piece, as Paulo Carrillo-Weisenburger’s corner kick curled to the top of the box for Zarate to thump home a header for his first goal in his first appearance of the season.

“It was amazing, we were really excited and pumped up for our first home game, and I’m glad to help the team out with a goal,” Zarate said.

Carrillo-Weisenburger also had a pair of standout chances in the final 19 minutes of the game. First seeing his clean strike pushed wide of the far post by the Taft keeper, then in the 80th minute, he rang a shot off the crossbar from the top left side of the box.

Goalkeeper Sunny Dhaliwal made a pair of significant stops in the final 45 minutes, with none bigger than a diving denial on a shot ticketed for the near post along the turf with less than two minutes remaining.