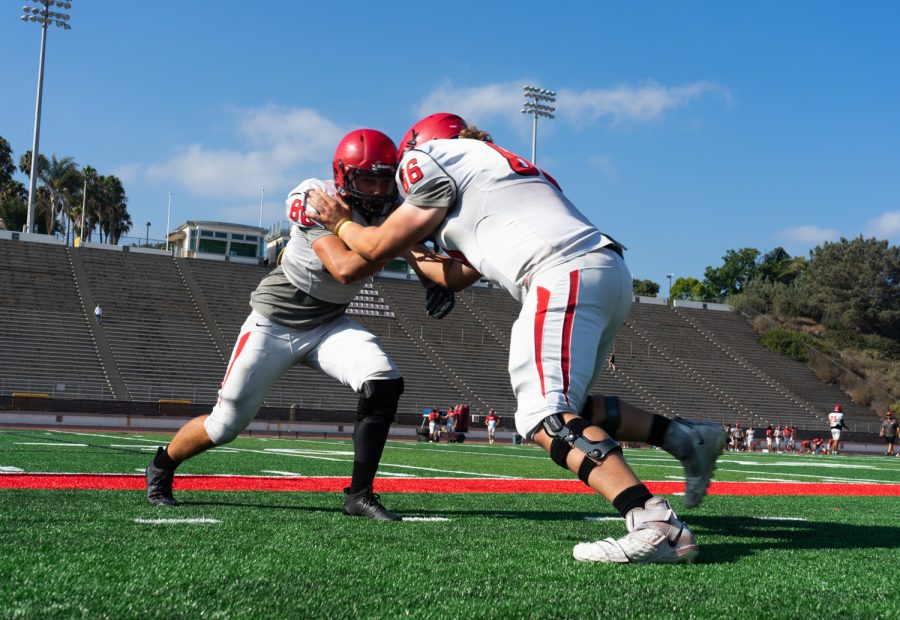 From left, Jaden Self and Howard Wood clash during defensive practice on Sept. 1 at La Playa Stadium at City College in Santa Barbara, Calif. This is their first year at City College.

There’s a squad full of new players and a brand new turf at La Playa Stadium.

“It’s exciting to have a chance to play again,” said head coach Craig Moropoulos. “We’ve been going against our own guys for a year now. They’re young, but they’re working hard and learning.”

The Vaqueros enter their 66th season boasting a 98-man roster with only four returning sophomores from 2019. A 75-player-strong freshman class was bolstered by record participation numbers in the spring and summer sessions after canceling the 2020 season due to COVID-19.

This combination of youth and depth has led to competition for positions across the board. Nowhere is that more apparent than at quarterback. Freshman and 2019 San Marcos High graduate Ben Partee earned the week-one start out of five signal-callers on the roster.

“We have four other dudes that can spin the ball, and coach Moropoulos said when he made the decision on Monday that at any point he trusts all five of us to go in and win a game,” Partee said.

Partee will be working with a squad of wide receivers, featuring the 2019 Pacific League second-team offense selection Cyrus Wallace — who assumed a leadership role alongside multiple promising first-year players.

“Getting them to realize how college football is, it’s a learning curve for sure,” Wallace said. “Everything is faster, the coaches are more serious, and the expectations are much higher.”

Moropoulos described freshman Marcus Bellon from Truckee, CA as having a “good camp at slot as a quick, scatback,” and La Habra freshman Jake Wells has been doing “really good things as a good route runner.”

Freshman Mekhi Norfleet from Concord De La Salle High shows a versatile and disciplined skill set amongst the group of very athletic running backs. They will be running behind an entire freshman offensive line with Donovan Davis from Houston, TX and Josiah Roa from Davis, CA. Moropoulos expects the crew this season will offer “plenty of opportunities for several players.”

On defense, returning sophomore Devan Tursini-White and freshmen Jordan Tagaloa and Semisi Falemaka from Bishop Diego High are expected to provide aggressive presences on the line.

“We have a culture of hard work and being part of the team.” Tursini-White said, “We take care of each other and we get things done.”

New Jersey freshman linebacker Tyler Haughney is relied upon to anchor the inside. Moropoulos noted the defensive backs are “a solid group that is going to be challenged, it’s a matter of who steps up.”

The biggest addition is the newly installed turf field at La Playa Stadium, which was completed over the summer.

“The quality of the new surface, we’re so grateful to those who supported it,” Moropoulos said. “Not only is it beautiful, it’s so much more functional and safe.”