SBCC football team optimistic for return to competition in Fall 2021 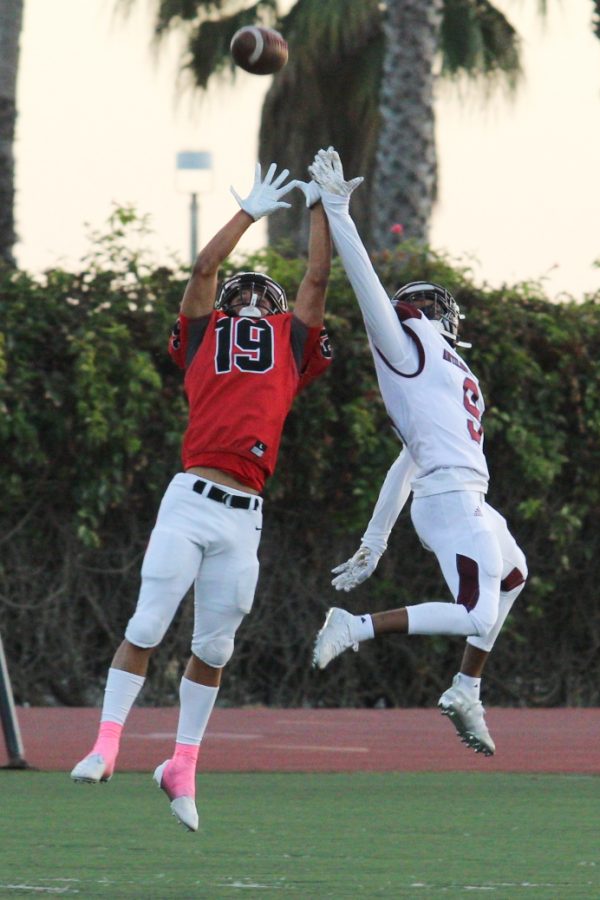 After the first football season cancelation in 65 years due to COVID-19, City College will open practices up for 15 days to the largest roster in head coach Craig Moropoulos' 15 years. File photo of Cory Butler (19) attempting to intercept the pass on Oct. 5, 2019, at La Playa Stadium at City College in Santa Barbara, Calif.

After Santa Barbara City College missed an entire football season for the first time in 65 years due to COVID-19, people are full of optimism with preparations underway for the possible return of sports in the fall.

The Vaqueros will have the opportunity for 15 days of practice during the spring, and the team’s roster will be bolstered by one of the largest incoming classes of head coach Craig Moropoulos’ 15-year tenure.

“We’ve never really had this many guys in a spring session,” Moropoulos said. “They’ve bought in, they’ve worked through and they’ve seen the carrot to have practice the way the four-year schools do.”

According to returning sophomore defensive back Cory Butler, motivation to get back on the field was key in overcoming the moments when team members would lose hope.

“Everyone knew there was a way to get back to playing,” Butler said, “staying focused, and knowing that the time will come.”

In July, the California Community College Athletic Association (CCCAA) initially moved all 2020 fall sports to spring, then later set a December deadline for schools to opt in or out of the shortened two-season spring. City College decided to opt out of both, first in December and then in March.

Though there was no competition, teams were able to meet and train by following strict safety protocols. Despite these precautions, the football team saw in-person meetings shut down for two weeks due to positive tests in September.

While the season’s cancellation doesn’t affect the “eligibility clock” of CCCAA and NCAA student athletes, it created challenges in the recruiting process for both coaches and players.

Butler is hoping that playing again will help him earn a spot at the next level.

“It’s an opportunity to get better at what I want to do and keep looking forward,” he said, “show what I can do, get more into technique on the field and on film more.”

Meanwhile, Moropoulos credits recruiting coordinator Rob Adan and his staff for casting a wide net to attract athletes in spite of the pandemic. City College was also able to follow high school programs in the area in an abbreviated five-game spring season.

“We’ve been having virtual recruiting tours and Zoom tours,” Moropoulos said. “We have a meeting and show them the video tour, and talk about all the opportunities academically.”

As added boosts, the team will have access to the Life Fitness Center, which is set to be re-opened during the Summer I session, and while the playing surface at La Playa Stadium is replaced, Moropoulos said the team has reached out to Santa Barbara High School to continue on-field workouts.

The team continues to follow all health and safety protocols mandated by county health officials, City College and the CCCAA.

“A big part of what has made everything possible was our coaches, and the guidelines they put on things,” Butler said. “They do a lot of work sanitizing things, a lot of work that people don’t realize. The coaches and medical training staff played a big part in making it possible for us.”

Moropolous credited the support of Athletic Director Rocco Constantino and Faculty Adviser Kathy O’Connor, saying “we’ve been dealing with this pandemic and there’s been so much negative, that it’s great to have people for us and for our student athletes.”

Now with adjusted case rates falling and vaccination rates continuing to rise, so too are the hopes for the Vaquero football team.

“We want a conference championship, that’s what we talk about all the time at practice,” Butler said. “We’re putting in the work, and I feel we have the blueprint to do that.”