From Izegem to SB: How the Buyse twins led SBCC tennis to victory 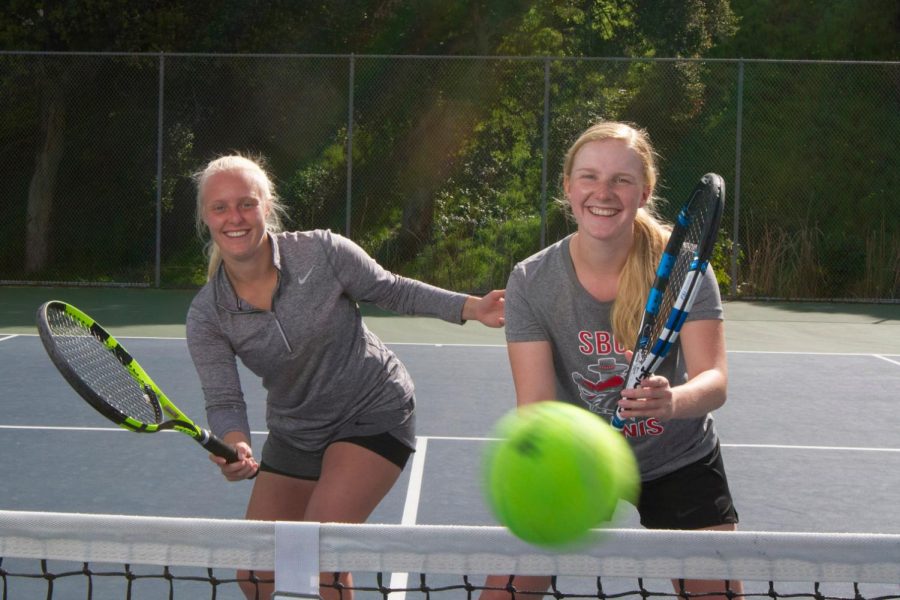 Joica Buyse serves the tennis ball while her twin sister Jamaica stays ready for the response of an opponent on March 9, 2020, at Pershing Park tennis courts in Santa Barbara, Calif. Joica and Jamaica are second-year tennis players from Izegem, Belgium.

With matching uniforms, long blonde hair and similarly focused expressions, one would be forgiven for thinking they were seeing double when watching Jamaica and Joica Buyse play tennis together.

But the Buyse twins are complements, not duplicates.

“We complement each other in everything,” Jamaica said.

The sisters, who play doubles and singles for City College, said they bring out the best in each other on and off the court. When playing doubles, Joica specializes in her forehand while Jamaica excels on backhanded shots. When not playing tennis, the slightly older Jamaica is more forward and outgoing while Joica is more reserved and quiet.

As the twins’ head coach, Christina Klein, put it, “[Jamaica] is ‘the boss,’ in terms of how she presents herself on the court and at practice, she is a fierce competitor.”

Joica, on the other hand, “is just as fierce a competitor, but in a more subtle way… she just gets the job done,” Klein said.

The sisters hail from Izegem, Belgium, where they were athletes from a young age. They were inspired to try tennis when they were seven years old and a coach came to their school and talked to them about the sport.

The twins learned about tennis in a room no larger than a tennis court, but most of their early memories involve laughter.

Kelly Coulson, a teammate of the Buyse sisters, said that the first thing she noticed about them was their work ethic.

“They set a good example,” another teammate, Sydney Paillon, added.

On the court, the twins had a very successful season and a half for the Vaqueros.

Klein said that they “paved the way” for City College women’s tennis to win its first Western State Conference title in 2019.

“No doubt we would have claimed our second WSC Title had our season not ended,” she said.

Jamaica and Joica had success as singles players, with the former going 8-1 in the number two spot and the latter going 8-2 in the number four spot in 2020, but their partnership and chemistry helped them have the most success playing doubles. The Buyse twins went 12-1 before the season was canceled due to the coronavirus pandemic, ending their chance to finish their Vaqueros career with another conference title.

They speak Dutch to each other on the court, which their teammates joke gives them an edge.

“I feel like it’s weird to speak English with each other,” Joica said.

The twins have been playing doubles with each other since they first picked up rackets, so their chemistry goes far beyond sharing a language.

“If we’re playing and we can’t say something we look at each other and know what we’re trying to say,” Jamaica said.

The sisters said they compete with each other, but there are never any hard feelings.

“We never get jealous, there’s no fighting,” Joica said.

Klein said that their closeness as sisters helps them improve, even though she said she noticed the occasional small argument.

“It is refreshing because they can be completely honest with each other when other teammates are afraid to do so,” she said.

As the only sophomores on the team, Jamaica and Joica said they will miss the other girls when they transfer next year.

They don’t know where they’ll be going yet, but they are sure of one thing, they will be going there together.