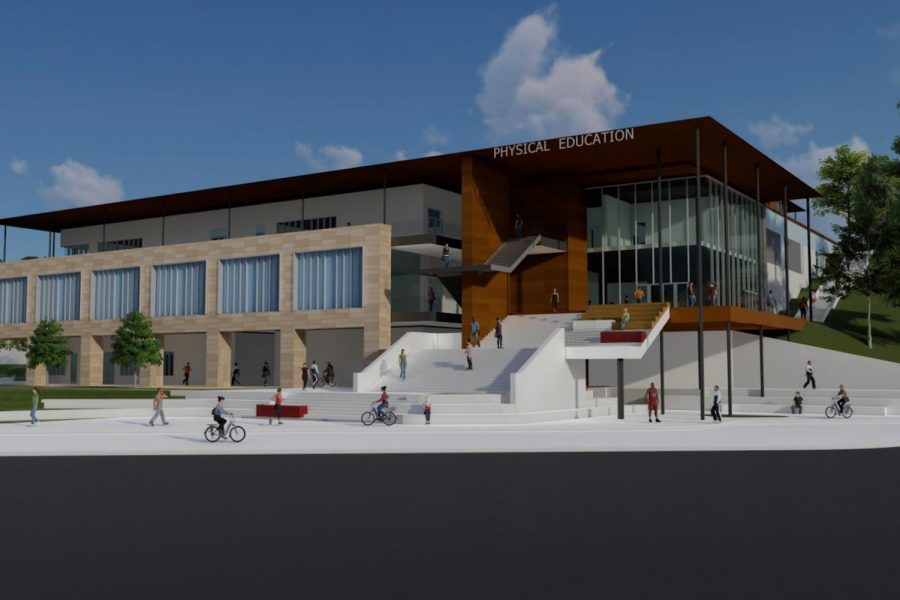 A perspective rendering of the new Sports Pavilion from the main entryway near Parking Lot 2C. The pavilion will be four stories high, with the new gym beginning on the second floor. “It clearly denotes a front door which is something that the existing physical education building is somewhat lacking,” said Steve Flanagan, Director of Higher Education at LPA Inc. at the Board of Trustees’ April 9 meeting. Courtesy of LPA.

Despite the COVID-19 pandemic bringing most things to a standstill, City College is staying on track with plans for the upcoming renovation of the Physical Education Building. “We’ve been staying really active,” said Athletic Director Rocco Constantino.

The college announced last fall that they hired LPA Inc., a sustainable design architecture firm based in Irvine, to replace the gym and surrounding buildings with a state-of-the-art athletic complex.

Over the past six months, a team from LPA has been in constant contact with Constantino and the Board of Trustees to move forward with the planning of the project, which is slated to begin with construction next summer.

Steve Flanagan, Director of Higher Education at LPA, has met with Constantino and the Board over Zoom, and presented plans at the Trustees’ April 9 meeting.

In the meeting, Flanagan presented early renderings of what the complex may look like, as well as an update on the projected cost of the project.

The state approved $40.1 million in funding for the renovation last summer, and will cover $32,043,000 of the project. The rest of the money will likely come from the district.

Right now, plans show the estimates for the project as slightly over-budget, which was a cause for concern for many trustees during the meeting.

“It’s nothing out of the ordinary [in terms of cost estimates] it’s just a very large project,” said Flanagan.

An easy solution for a project that is over budget would be to build less, but the state mandates that the college cannot increase or decrease the assignable square footage (ASF) of the new complex.

All in all, the new complex is set to take up about 77,187 square feet, which includes total gross square footage—space that includes stairs, elevators and electrical rooms.

In order to reduce cost, the college and LPA have decided to keep the current gym and Life Fitness Center in working order while the new four-story complex is built where the faculty offices and classrooms currently are.

Phase one, set for summer 2021, will include the demolition of the buildings closest to La Playa Stadium.

After the new complex is built, the old gym and LFC will be demolished and replaced with a half-acre multi-functional grass area.

At the board meeting, Flanagan also addressed some of the trustees’ concerns over rising sea levels by showing a composite map of what City College areas might be in danger.

The diagram shows that the new complex should be safe from any impending floods or storms, but LPA is taking measures to prevent any extensive damage.

The first floor of the building will be made of cast-in-place concrete, meaning that the concrete will be poured on-site to better protect any areas that are vulnerable to water damage.

“This will help protect the building from any abnormal or extraordinary storm surge or flooding surge so that the building will not be structurally damaged, or at least minimally compromised during any dramatic storm or flood,” said Flanagan.

The new complex is expected to be ready for students by the start of the 2024 spring semester.