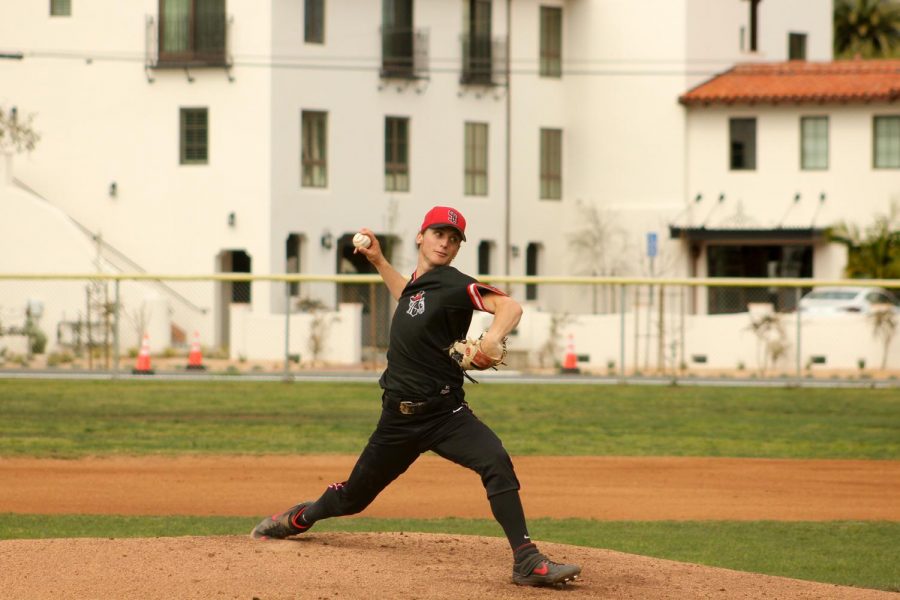 Toby Spach pitches in the fourth inning of the Vaqueros’ first game against the Allan Hancock Bulldogs on Monday, March 9, 2020, at Pershing Park in Santa Barbara, Calif. Spach pitched four no-hit innings where he walked one batter and struck out six.

An inability to land runners on base and a handful of critical errors contributed to a Vaquero loss in the first game of a three-game series with the Allan Hancock Bulldogs that kicked off Monday afternoon at Pershing Park.

The game started with a strong offensive showing by City College in the first inning. On the Vaqueros’ first at bat of the game, sophomore Ryan Guardino drilled a ground rule double to left center field. This was followed by a sacrifice fly by Alonzo Rubalcaba that drove in Guardino and put the Vaqueros ahead 1-0.

The Vaqueros’ early score was backed by a strong pitching performance by sophomore Toby Spach, who recorded five strikeouts in his first seven batters faced and pitched a no hitter through the first four innings. Spach was replaced in the fifth inning by sophomore Mason Metcalfe.

“We pitched well today. This was the first time this season that Mason had a hiccup late in the game, it usually happens early. Toby looked the best he’s looked all year and it was exciting to see,” said head coach Jeff Walker.

The visitors were held scoreless until an error by the Vaqueros late in the seventh inning allowed Allan Hancock’s Kadin Byrne to reach first base. This was followed by a two-run home run by Kalub Ramierez that put the Bulldogs ahead 2-1.

Errors were a recurring issue for the Vaqueros defense on Monday, with a total of five recorded between the fifth and the ninth inning. All four City College infielders committed an error.

Allan Hancock’s strong performance in the seventh inning was followed by another two run eighth inning putting the Bulldogs ahead 4-1 late in the game. One of those runs came on an errant throw to third base that let the Bulldogs runner advance home.

“Home runs happen, we minimize some of those errors and it’s a different game. Were a better team than that,” said freshman outfielder Chase Rowe.

A late comeback push in the bottom of the eighth inning seemed plausible when sophomore Ryan Guardino jacked a home run that seemed to give the offense a bit of life. Down just two runs, with two outs and a runner on first and third base, pinch hitter Zach Jensen struck out swinging.

The Vaqueros left a total of nine runners stranded on base in the loss.

“We gave that one away for sure. We made errors, and they took advantage of those errors. If we had played cleaner defense the outcome would have been different,” said freshman Kyle Fromke.

City College will face Allan Hancock on the road in game two of the series at 2:30 p.m on Thursday, March 12.