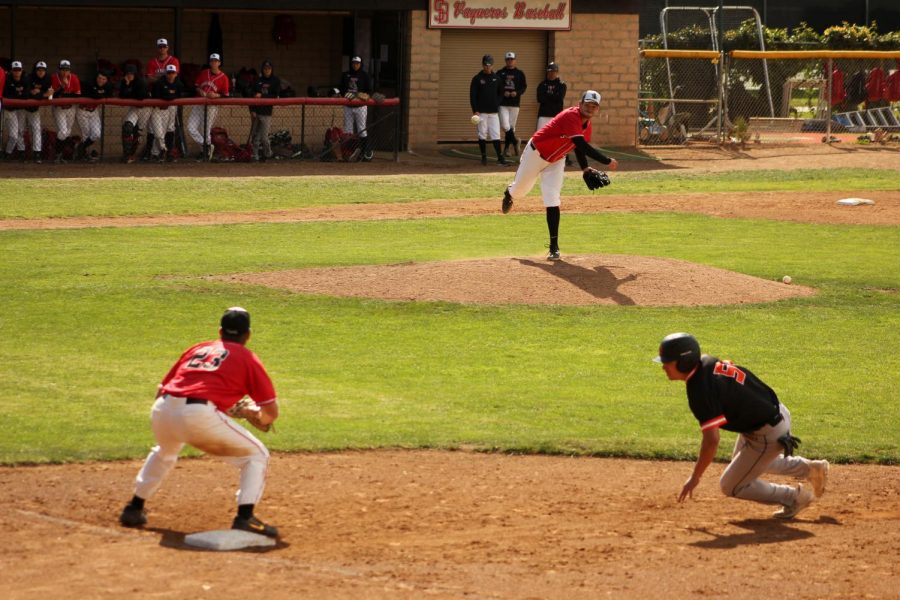 Pitcher Matthew Strother (no. 24) throws to first baseman Jacob Bravo (no. 23) in an attempt to catch Ventura’s Tommy Gibbons-Matsuyama (no. 5) stealing on March 7, 2020 at Pershing Park in Santa Barbara, Calif. Gibbons-Matsuyama was safe by a thin margin.

A spirit of redemption engulfed the baseball field and fueled an 8-3 Vaqueros victory on Saturday against the Ventura Pirates at Pershing Park.

“Me and the catcher Alonzo [Rubalcaba] make a plan and then we execute it,” said pitcher Matthew Strother, who finished the game with six strikeouts and gave up two runs on five hits.

City College came back from a 6-5 loss on Thursday with energy, consistent hitting and synchronized defense that secured their second win this week against Ventura.

Strother and third baseman Kyle Froemke were key players in getting the ball rolling.

In the bottom of the first, Froemke hit an inside-the-park home run that scored infielder Jacob Bravo and set the tone for strong performances throughout the game.

With City College leading 2-0, the Vaqueros were roaring.

“The energy was really good in the dugout,” said Froemke. “They really pulled through, it’s a real team effort.”

Noah Williamson and Ryan Guardino led the third inning with a single and a double. Bravo and Rubalcaba finished the push to make it 4-1.

In the fifth inning, Ventura was in trouble.

A double from Brandon Lawrence and a bunt from Williamson put a man on first and third.

Pirates pitcher Noah Proffitt was drilled in the upper abdomen when Guardino hit the ball back towards him. Proffitt was still down when Lawrence scored.

“That was my first one,” said Proffitt, who had never been hit by a batter. “That’s the biggest fear, but now that it’s happened I feel more comfortable about it.”

Although Proffitt popped back up, he was taken out of the game. Bravo then grounded out to shortstop and scored Williamson.

The offense played well, but the defense was crucial to the Vaqueros’ win.

A total of four double plays were made, including the stop by Lawrence, a toss to Trevor Davis, and shot to first that sealed the game.

Head coach Jeff Walker expects the season to come down to the last couple of games as they advance towards the playoffs. The Vaqueros currently sit with an overall record of 12-7.

“Our best baseball is still ahead of us,” said Walker. “There’s a lot of potential to get better as we go on.”