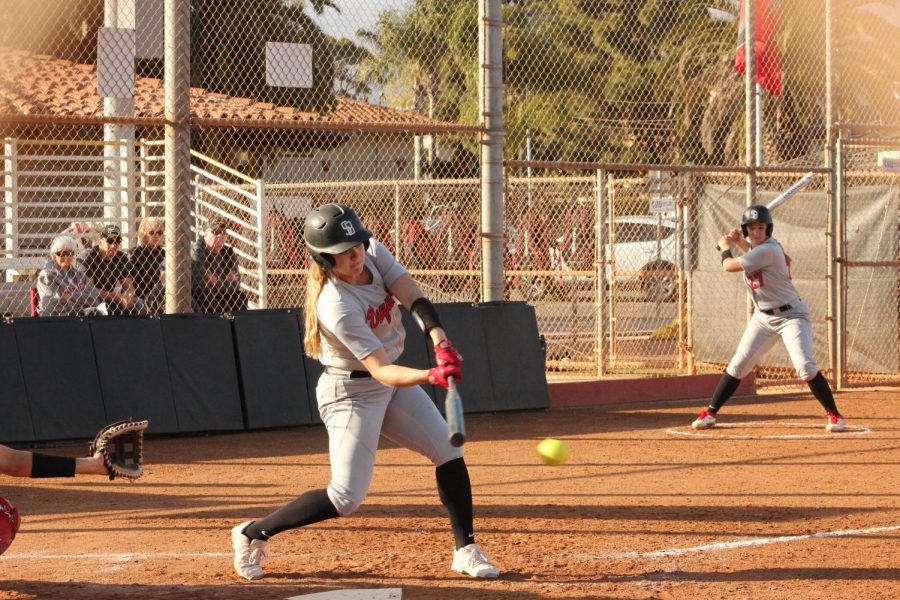 Designated hitter Hannah Weaver (no. 17) hits a hard line-drive to the Chaffey pitcher on Friday, March 6, 2020 at Pershing Park in Santa Barbara, Calif. Weaver did not have a base hit on the day, but she walked twice.

Vaqueros third baseman Lauren Del Campo shook her head in frustration after committing her second error of the fourth inning.

Her failure to handle the ball cleanly had kept the bases loaded and allowed the Chaffey Panthers to score their fifth run on Friday at Pershing Park.

The moment captured the frustrating nature of an afternoon when the City College softball team had six errors and only four hits in an 8-0 loss to a Panthers team with six wins in 21 outings.

“They were a beatable team,” said designated hitter Hannah Weaver. “We really beat ourselves.”

The game was reasonably close for the first three innings, with Chaffey leading by two entering the fourth.

That was when the wheels fell off.

The Panthers led with a double and did not look back, using three City College errors to their advantage as they racked up six runs and put the contest out of reach.

It was over before the sixth inning, as California Community College Athletic Association rules state that the game ends if a team is ahead by eight or more after five innings.

Cheyenne Walker, Taylor Tibbels, Emily LoneTree, and Sinai Miranda had the only four hits for the home team, and Weaver walked twice.

The defense was also an issue in the conference opener that they lost on Thursday.

“It was a tough day behind [pitcher] Carson [Dunckley],” said head coach Justine Bosio, referring to the fielding issues. “I think we’re pressing too quick and not sitting and thinking about, ‘OK, if the ball comes to me, what am I going to do?’”

City College is 1-6 over the last seven games, allowing an average of over eight runs per game over that span. An injury to pitcher Paige Powell has only made matters worse, leaving Carson Dunckley as the only full-time pitcher available.

Preventing runs is not the only concern however, as the Vaqueros’ bats have cooled considerably since a hot finish to February.

Last Saturday City College scored 25 total runs in two games against Orange Coast and Grossmont, but in the two games since the team has only been able to muster two runs.

Bosio explained that time off was a factor, as the Vaqueros did not play between Saturday and Thursday.

“I think taking a break after a really awesome day, mentally [a drop-off] just happens,” she said.

With an important stretch of conference games coming up, City College is running out of time to fix the offensive and defensive issues. The Vaqueros sit in sixth out of seven teams in the North Division of the Western State Conference, and a continuation of their losing streak would make a run to the playoffs increasingly unlikely.

“Hopefully this was the bad week to get out of our system,” Bosio said.

The team will have a chance to redeem itself with a road game against conference rival Moorpark at 2:30 p.m. on Tuesday.

“We need to find the win within ourselves,” Weaver said.