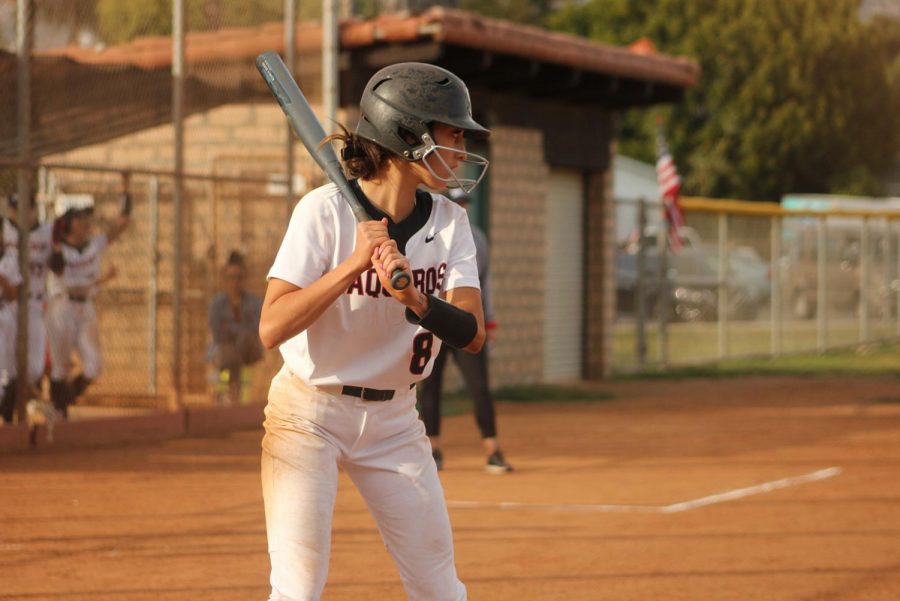 Carson Dunckley bats in the Vaqueros’ game against the Oxnard Condors on Thursday, March 5, at Pershing Park in Santa Barbara, Calif. The Vaqueros lost to the Condors 11-2 in five innings.

A two-run shot by Emily LoneTree was the only bright spot for the Vaqueros in their loss to the Oxnard Condors on Thursday.

The Vaqueros fell 11-2 in a game that was called in the fifth inning because of the California Community College Athletic Association’s mercy rule, which states that the game ends if a team is trailing by eight or more runs after five or more completed innings.

City College’s offense was quiet, and the defense failed to make routine plays.

After winning three straight, City College has fallen in five of its last six games.

Carson Dunckley started the game for the Vaqueros and gave up six earned runs in three and one-third innings.

Aggressive base running and stealing put the Condors up by two in the first inning.

The barrage just got worse from there.

The Condors teed-off on Dunckley and reliever Cheyenne Walker in the fourth inning, scoring eight runs.

Six hits for the Condors in the fourth put the game virtually out of reach for City College.

The game spiraled out of control and City College couldn’t keep up.

The Vaqueros’ two runs came on a fourth-inning homer by LoneTree.

LoneTree’s blast was her team-leading fifth of the season.

Despite the six hits allowed by Oxnards’ Kayla Kern, the Vaqueros struggled on offense more so than they have in the past couple weeks of play.

“It’s just tough for a lot of our girls to wait on the ball,” said Taylor Tibbels, who scored on LoneTree’s home run.

Thursday marked the start of conference play for the Vaqueros, and kicking the offense into gear is going to be vital for the team to make the playoffs.

“I think we just need to click as a team,” said Bosio.

Mental errors have kept the Vaqueros from defending efficiently, which was their kryptonite against Oxnard.

Getting outs has been tough, but Coach Bosio is looking to turn that around before conference play resumes on Tuesday.

“We’ll figure it out over the weekend and just go back to the drawing board,” she said.

Also on Thursday the Vaqueros, along with every other team in the WSC North, received word that LA Pierce College dropped its softball team for 2020.

LA Pierce’s newspaper The Roundup reported that the team did not have enough eligible players, forcing them to hand two “no contest” rulings to each to the seven teams they would have played.

The Vaqueros were originally scheduled to play the Brahmas on the road on March 12 and again at home on April 7.

The Vaqueros may add two games to their schedule to replace the conference games against Pierce, but that has yet to be determined by the athletic department.

The Vaqueros return to the field to battle the Chaffey Panthers in a non-conference matchup at 2:30 p.m on Friday, March 7 at Pershing Park.