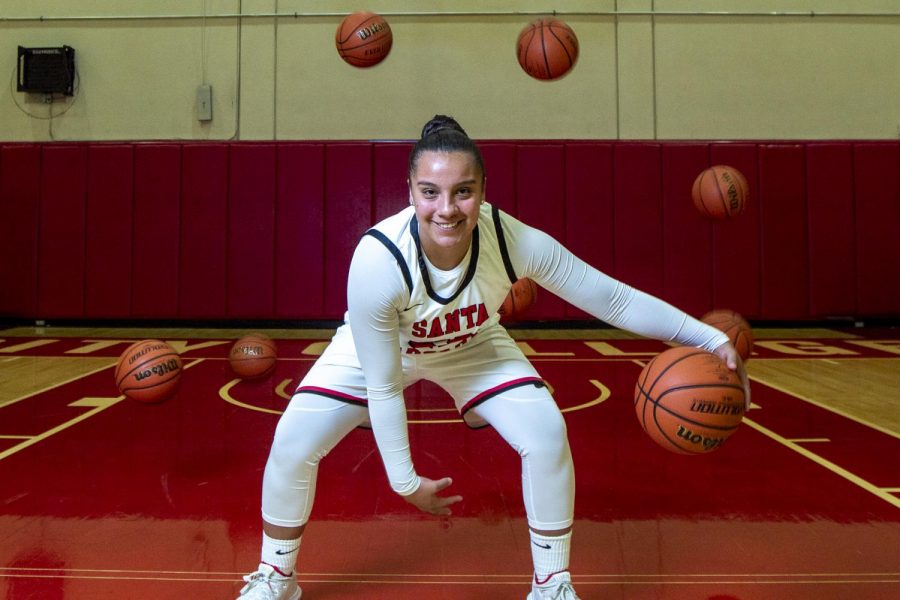 Alondra Jimenez dribbles the ball through her legs on Thursday, Feb. 20, 2020, in the Sports Pavilion at City College in Santa Barbara, Calif. Jimenez grew up in Santa Barbara and has started every game for the 13-7 Vaqueros.

From the time Alondra Jimenez first picked up a basketball in kindergarten, when she would hop the fence to her playground with her older sisters and started making shots for chewing gum, she’s always been in love with the game.

Coming home, she asked her dad to sign her up for a team, but was immediately shut down.

Her dad’s denial couldn’t stop her efforts to be signed up and play, so instead she asked her mother.

Together they came up with a plan to sign Alondra up for a team without letting her father know.

“I would jump out the window from my room and my mom would meet me at the liquor store on the corner,” she said.

From the youth leagues at Page Youth Center to Santa Barbara High School, to college ball at Vanguard University and City College, Jimenez has dedicated her life to the sport.

She found a deep love for the game, and knew right away that she wanted to pursue basketball. She kept working hard and dedicated herself to go all in to try and make it.

“It’s that mamba mentality,” she said.

That mentality is also what got Jimenez into Vanguard University, despite having two major setbacks throughout her time at Santa Barbara High School.

“My freshman year I was ready to play, made it on varsity and was really excited and then I tore my ACL,” she said.

She persevered and came back to full health during her sophomore year, playing a great season, but going into her junior year she suffered another ACL tear, this time in her other knee.

“It affected me both physically and mentally,” Jimenez said.

Vanguard still offered Jimenez a scholarship, though after she went for a visit she was unsure about taking up the offer until her mom convinced her to take the chance and go.

Her choice didn’t play out as well as she wanted and one year after moving to Costa Mesa to play for Vanguard, she moved back home after experiencing discrimination over her sexuality when her girlfriend visited from out of town.

Coming back to Santa Barbara afterwards, she thought about quitting both school and basketball and finding a job instead.

Sandrine Rocher-Krul, head coach of the women’s basketball team, had other plans and convinced her to play for the Vaqueros.

“She changed my whole life,” Jimenez said about coach Sandrine.

Coach Sandrine speaks highly about Jimenez and is amazed by the kind of person she is even more than for her skills on the court..

She describes Jimenez as a “free spirit” that brings enthusiasm and support to every team she is a part of and how she is a gracious person that always wants her peers to succeed.

“She can impact lives because of her gregariousness,” said Rocher-Krul.

Jimenez now has more universities that are looking to give her a scholarship, but she is yet to decide where she will continue her career..

One thing is certain: What started off from shooting for chewing gum in kindergarten has now grown into an opportunity to pursue a life and career in the sport she loves.