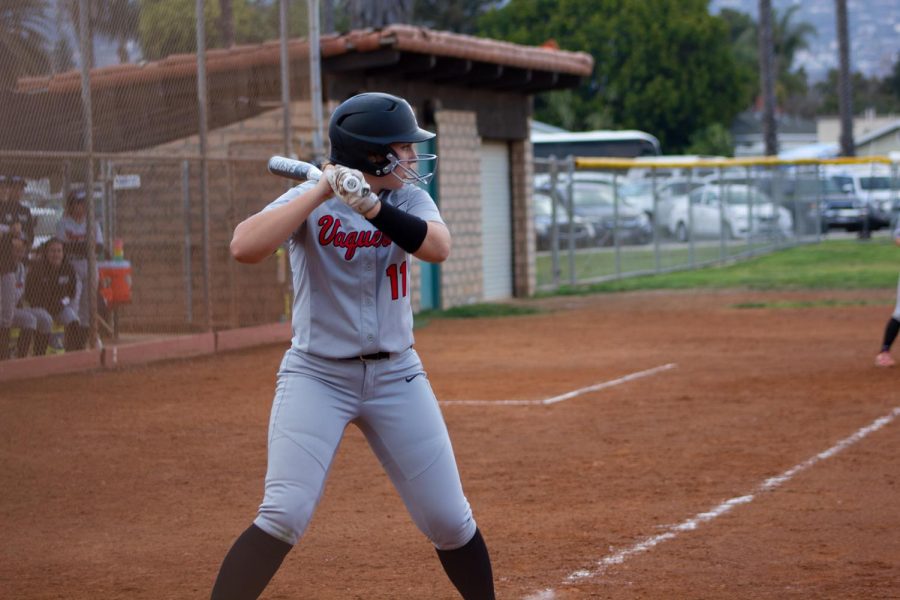 Taylor Tibbels gears up to walk off City College in the sixth inning sacrifice fly, part of the Vaqueros eight-run inning, which won the game via the mercy-rule on Feb. 21, at Pershing Park in Santa Barbara, Calif.

A tight-knit 6-6 softball game unraveled in an eight-run Vaquero sixth inning, where Emily LoneTree was a triple away from the cycle in the Vaqueros’ 14-6 win over Santa Monica on Friday.

Madison Foster and LoneTree both ended the afternoon with three RBIs.

Taylor Tibbels drove in the first and last Vaquero runs of the game, bashing a triple to right field in the first inning and hitting a sacrifice fly to cap off the mercy-rule victory.

In the bottom of the third, LoneTree, already with a double, bashed the Vaqueros’ first home run of the season to drive in Lauren Del Campo and cushion City College’s lead.

“We’ve been waiting for [LoneTree’s] bat to come alive,” said Head Coach Justine Bosio. “She’s a phenomenal athlete and defensively has been making some killer plays.”

Friday’s season-high 14-hit win was the Vaqueros’ first at home and their second victory in a row after defeating LA Valley 12-3 on Feb. 11.

Paige Powell started the sixth-inning scoring, notching her first RBI of the day on a single to left field to give her squad a 7-6 lead.

With the bases loaded, Santa Monica was careful pitching to LoneTree and walked her to bring Tibbels home to extend City College’s lead.

“For a while, I didn’t have confidence in myself but after this game…I know I can pick myself up and be mentally stronger at the plate,” said LoneTree.

LoneTree admitted she was thinking about a triple to nab an esteemed cycle, a game with all four types of hits, but thought about her team first and ended up drawing a walk with the bases loaded in the fifth.

Although the Vaqueros would only find two more hits in the inning, City College managed to score off a hit-by-pitch and a wild pitch to put them up 13-6 before Tibbels sent everyone home with a walk-off sacrifice fly.

Vaquero starting pitcher Carson Dunckley ran into trouble in the top of the fifth, when the Corsairs battled to take a 6-5 lead via a fielder’s choice.

“I knew if we were disciplined at the plate we could come back and win,” said Bosio. “We’re just trying to continue to press urgency with the girls…having the eight-run inning earlier, instead of waiting until the sixth.”

Dunckley got out of a bases-loaded third inning jam when first baseman Hannah Weaver tapped the bag to make the unassisted third out.

Skyler Gothan reached first base and brought LoneTree home in the second via a throwing error by Santa Monica pitcher Talia Hunter. Brianna Torres continued the Vaqueros’ attack reaching second on a single, after another Corsair error by left-fielder Kelley. The Vaqueros weren’t errorless themselves, officially they had one to Santa Monica’s six.

After a single in the bottom of the fifth, LoneTree showed her speed by taking second and third base off of a sacrifice bunt by Gothan, before coming home to tie it on a 6-3 groundout off the bat of Dunckley. Powell, starting designated player, took the mound and got the win in the sixth, switching positions with Dunckley, to bring her record to 2-3.

City College will face Golden West and Glendale in a doubleheader on Saturday at Pershing Park.