Vaqueros’ playoff hopes dwindle as Moorpark runs past them 102-66 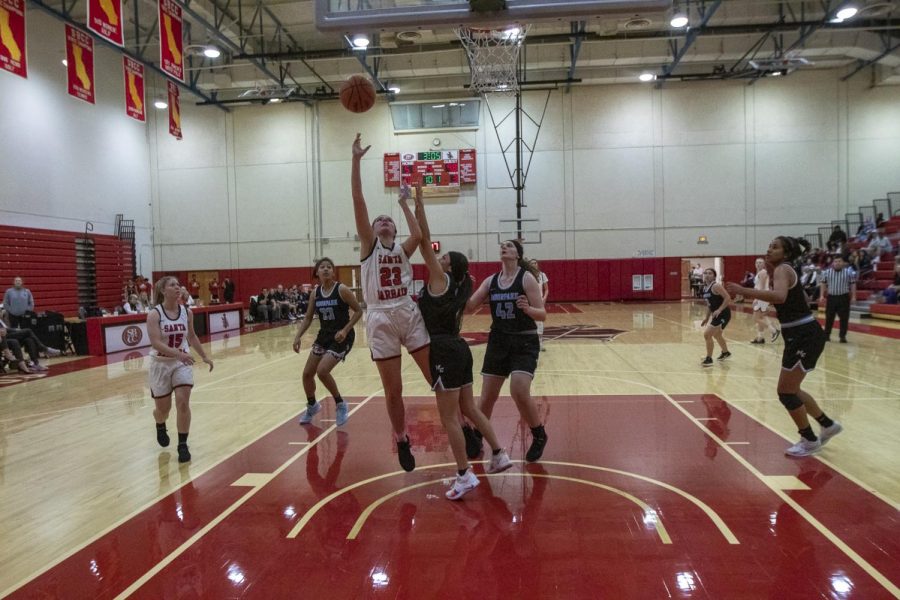 Hannah Sabin (No.23) posts up and makes her layup on Wednesday, Feb. 19, 2020, in the Sports Pavilion in the City College in Santa Barbara, Calif.

From the start of the second quarter, the Vaqueros wouldn’t have been able to catch up to the Raiders if they had been driving race cars.

“[Moorpark] is a fast team, they’re number one in the state,” said sophomore forward Hannah Sabin.

Wednesday’s 103-58 loss marks the second time this month that City College has fallen to Moorpark. On Feb. 1, the Raiders beat the Vaqueros 102-66.

“The game plan was that we were just going to focus on having fun and being a team,” Sabin said. “We didn’t focus on one player, we just focused on ourselves and playing as a team.”

City College got off to a hot start, but Moorpark quickly caught up and sped past the stumbling Vaqueros. With seconds left in the first quarter, Moorpark forward Britt Van Buren intercepted a pass and drove it in for a layup.

That quarter-ending misstep set the tone for the rest of the game, as Moorpark’s lead would only grow.

City College’s passing game was good, but Moorpark’s was better.

The Vaqueros were fast, but the Raiders were faster.

Moorpark made 46.5% of the shots that they took, overshadowing City College at 38.7%.

The Vaqueros were the underdogs in this matchup and, had they beaten the 23-1 Raiders, they would have made a statement.

They could have proved that their loss on Feb. 1 was nothing more than a fluke.

Instead, they reaffirmed that Moorpark is a force to be reckoned with in the Western State Conference.

“There were some mistakes and of course Moorpark capitalized on that,” said sophomore guard Sophia Torres.

Torres led the team with 12 points and 30 minutes on the court.

Moorpark was able to win by as wide of a margin as they did because they took advantage of City College’s mistakes before the Vaqueros even had a chance to react.

Of the Raiders’ 103 points, 32 came off Vaquero turnovers.

The game was a puppet show, and the Raiders were pulling all the strings.

“I think we need to do better on our defensive side, I mean offensive as well but we just need to keep up and keep our heads up,” Sabin said.

Wednesday’s loss bumps the Vaqueros down to 2-5 in conference play, but they are still in the hunt for a playoff spot.

The teams that will be in the playoffs are not determined solely by record, but rather by a formula that often leaves teams in the dark until the season is over.

Athletic Director Rocco Constantino said that the team is on the borderline of making the postseason, and they probably won’t know until after the regular season ends.

City College will play its final game of the regular season on the road against Allan Hancock College on Friday.

If they win, it could send them into the playoffs.

The Vaqueros previously beat the Bulldogs 77-67 on Feb. 5 at home.

“Our mindset is just putting it all out on the court. Coach Devin said that we can’t just show up, we have to get our heads in [it] right, and just play our game,” said Torres on Associate Head Coach Devin Engebretsen’s postgame speech.

The Vaqueros needed to catch up before they got left in the dust. The Raiders never gave them that opportunity.

The clock is ticking on the Vaqueros’ season and they may not be able to stop it, but they will do their best to slow it down.

“This means nothing,” Sabin said of Wednesday’s loss. “We still have to focus on Hancock.”