More of the same: Vaqueros fall to LA Pierce in final home game 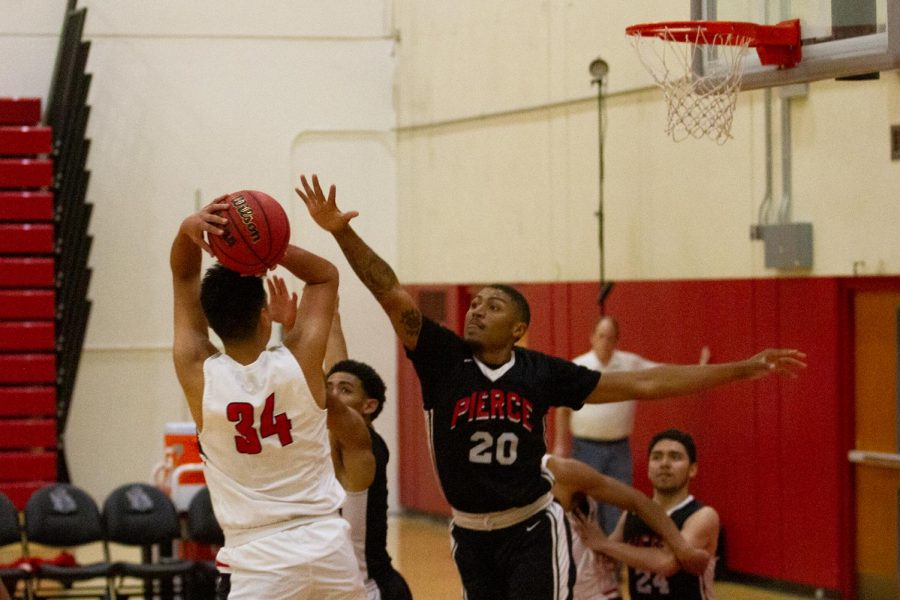 Forward Carlos Arevalo (No. 34) sinks a shot over the outstretched arm of LA Pierce’s Jayson Moore (No. 20) on Feb. 19, 2020 in the Sports Pavilion at City College in Santa Barbara, Calif. The Vaqueros lost the game 60-51.

In 25 games, with only one remaining this season, the City College men’s basketball team has only managed one victory.

Late in the second half of Wednesday night’s game, freshman guard Adrian Julliand-Johnson drained two free throws to put the Vaqueros up 49-47 over LA Pierce. It looked as though the win total might double in the last home game of the season.

Six minutes and a flurry of turnovers later, the players walked silently to the locker room to talk about their 60-51 loss.

“It was a tough game, but I thought we played really hard,” Julliand-Johnson said. “It was our only sophomore’s last home game, so we wanted to play hard for him.”

Joseph Holden, the sophomore, took a picture at center court before the game with his head coach and family.

Holden has started 43 games and scored over 500 points for the Vaqueros over the last two years. He finished third on the team in scoring last year and second this year.

Hodges outlined areas that his team needs to work on, but he was impressed by some aspects of the game.

“I thought we played hard,” he said. “And we played some good defense.”

He explained that the late-game collapse was due to an inability to deal with LA Pierce’s press defense, leading to turnovers and easy layups at the other end.

The Vaqueros trailed for nearly the entire game but never let the score get out of reach, which put them in position to take the lead near the end.

For almost three minutes after Julliand-Johnson put City College ahead, neither team scored.

“We didn’t get the ball up,” Hodges said.

Turnovers and missed shots kept the visitors within striking distance until LA Pierce forward Dallas Johnson got his own rebound and finished through a foul for a three-point play that regained the lead for his team.

Despite his freshman status, Julliand-Johnson said he “most definitely will not” be back next season.

For whoever does return in hopes to have a better season, he said that big changes are needed.

He hopes people will care enough about the program to “shake it up completely.”

Hodges pointed to “flat-out inexperience” on a team full of freshmen as the main culprit for a dismal season.

“It’s a big jump to this level,” he said, referring to the difference between high school and college basketball.

He also said that the team consistently struggled to score, which put more pressure on the team’s defense.

Hodges declined to comment on what changes would be made going into next season because the season is not over yet. He said that he needs time to reflect after the season before he knows what steps will be taken.

The Vaqueros will have one more shot at their first win since December when they travel to Moorpark at 7 p.m. on Friday.