SBCC stays in playoff contention with narrow victory over Oxnard 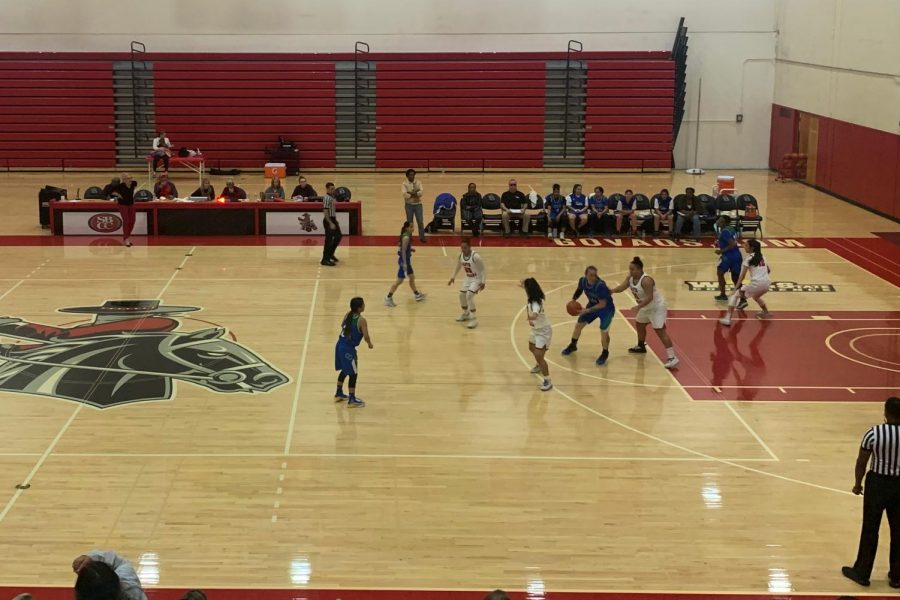 City College players defend the Oxnard offense in the third quarter of their game against the Condors on Saturday, Feb. 15, in the Sports Pavilion at City College in Santa Barbara, Calif. The Vaqueros narrowly beat Oxnard 70-69.

City College came out hot in the first half and won a crucial game against Oxnard in its run for the playoffs on Wednesday.

Running the fast break with efficiency and keeping Oxnard outside the paint led to a good night on the defensive end despite having trouble taking full control of the game.

As the game ended and both teams were still in it, the crowd was buzzing.

The crowd’s support was something Ciera Van Quick felt was important in Wednesday’s game. “They keep us motivated,” she said.

With this win, the Vaqueros are still in the run for a playoff spot, currently in the third spot in the conference with the top two seeds advancing to the playoffs.

They have one more home and one more away game and need at least one win in the last two to advance into playoffs.

Sophomore forward Sophia Torres led the team in scoring, putting up 21 points on eight for 12 from the field.

A big part of the trouble controlling the game was fouling. The Vaqueros allowed Oxnard to go to the line for a total of 27 shots, knocking down 22 for a percentage of 81.5.

Going into the last two games and trying to clinch a spot in the playoffs, the Vaqueros have to work on defending without fouling.

“We’re going to have to work on our footing now,” said Torres. “Try to get less fouls because that really hurts us.”

Both Oxnard and City College continued to trade baskets and keep the game close, going into halftime with the Vaqueros up 39 to 28.

City College took back control at the start of the second half, where they led by 17 at one point.

As the fourth quarter came to a close, the game was up for grabs. Oxnard took its first lead of the game 69 to 67 with 29 seconds left.

Van Quick made her only field goal of the game to tie the game before freshman guard Jordan Parkhurst hit one of two free throws to put the Vaqueros back on top with 69-70 before the clock ran out.

Saturday’s game saw a crucial Vaquero win to keep them in the playoff run with two games left this season.

The Vaqueros battle Moorpark in their final home game of the regular season at 5 p.m on Wednesday in the Sports Pavilion.