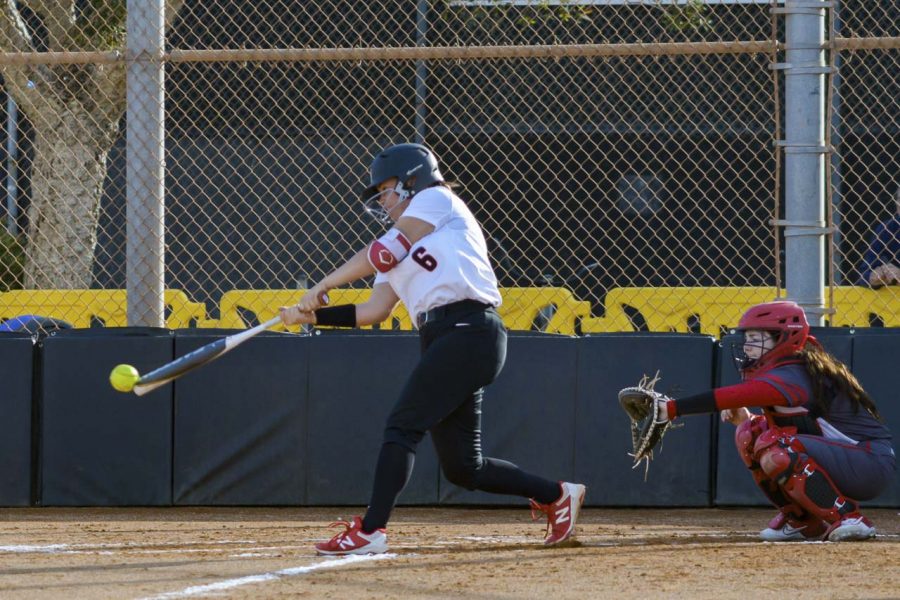 Paige Powell drives a ball down the right-field line during the third inning of the Vaqueros game against the Bakersfield College Renegades on Thursday, Jan. 30, at Pershing Park in Santa Barbara, Calif. The Vaqueros lost the game 13-5.

City College softball started its day strong, scoring five runs in the first two innings, but couldn’t halt the onslaught of the Bakersfield Renegades, who outscored the Vaqueros 13-5 to win by mercy rule.

Per the NCAA rulebook, which the California Community College Athletic Association follows, if a softball team leads by eight or more runs following five full innings of play, they win via the “mercy rule,” as long as the losing team has had equal chances to bat.

Momentum shifted early on in the home opener when starting pitcher Paige Powell took a hard hit single to the left shoulder after facing two batters.

In the first inning, Powell struck out one and allowed no runs. On offense, batting cleanup, she knocked in Sinai Miranda and advanced Madison Foster to third base on an RBI single pulled to the left side.

The Vaqueros led 4-0 after the first inning.

The start looked encouraging after City College was shut out in an 8-0 loss in Tuesday’s game against Riverside.

“We obviously got run-rolled in our game on Tuesday, without scoring runs… to see them make that adjustment and come and score in the first inning was really awesome,” said Head Coach Justine Bosio.

The Vaqueros would end the day with five runs, 13 hits and one error.

Shortstop Emily LoneTree temporarily stopped the bleeding when she nabbed a line drive off of Renegade backstop Kristen Burgeis and zipped it to first baseman Hannah Weaver for a double play.

Bakersfield could not be stopped, scoring 13 runs in the last five innings of a game that only lasted six.

Despite the disappointing result, Del Campo was a standout for the Vaqueros in the game. She led her team offensively, going three for four with two RBIs and a run.

“It just felt good to start off the season like that,” she said.

The game on Jan. 24, which was scheduled to be the home opener, was canceled when San Diego City College failed to put a full team on the field.

“I’m disappointed,” expressed Powell regarding the canceled game. “I love this game and I love to play as much as I can.”

The Vaqueros return to the field to battle Saddleback in a double-header starting at 11 a.m on Saturday at Pershing Park.