Vaqueros go winless in January, lose 96-66 to Moorpark at home 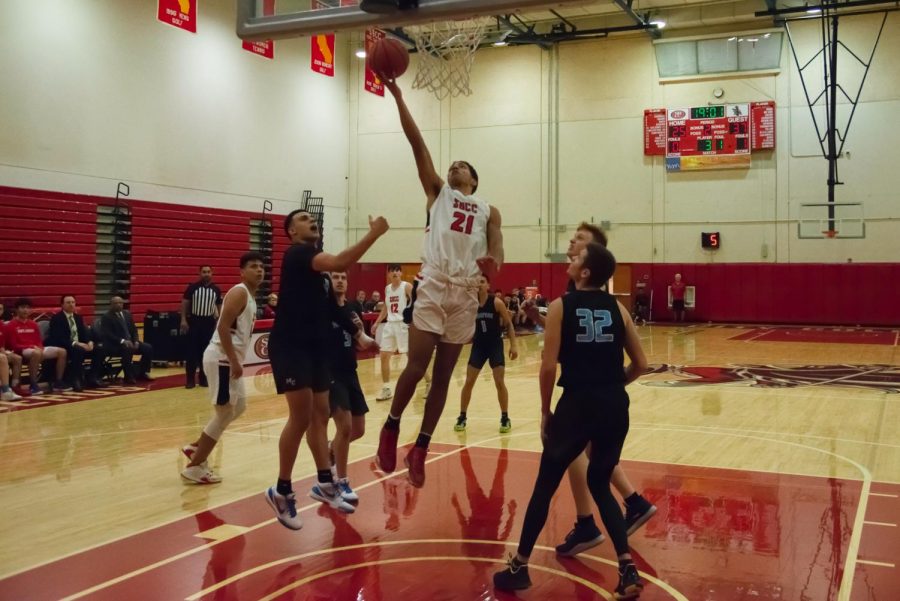 Adrian Juilland-Johnson (No. 21) puts up a lay-up past defenders during the first half of the game against the Moorpark College Raiders in the Sports Pavilion Gym on Wednesday, Jan. 29, 2020, at City College in Santa Barbara, Calif. The Vaqueros lost the game to the Raiders 96-66.

The Vaqueros and the Moorpark Raiders began Wednesday night’s game with a 24-second shot clock violation and an eight-second backcourt violation as a tribute to Kobe Bryant, who died Sunday morning in a helicopter crash.

24 and eight were the two numbers Bryant wore in his career.

The Vaqueros expressed their grief over the legend’s passing after the game, which they lost 96-66.

“We were all devastated by the news,” said freshman guard Nicholas Muerzl.

Despite the heartbreak, the Vaqueros came out with a focus on controlling the tempo of the game, which they did well in the beginning.

Down by 10 points at halftime, the Vaqueros had the opportunity to compete but more mistakes in the second half combined with hot shooting by Moorpark caused the game to spiral out of control.

“Our depth is not really good, so the fatigue takes its effect,” said Head Coach Morris Hodges.

As the Vaqueros wore down, the number of turnovers increased. A total of 25 turnovers, 14 in the second half, led to 36 points and a growing lead for Moorpark.

“Our focus was to push out and to get their good shooters off the three and we did that in the first half,” said Hodges. “Then the tempo got out of hand.”

Muerzl said he sees controlling the tempo as an area to improve for future games.

“Personally I need to be more of a leader and tell people where to be,” said Muerzl.

The Vaqueros return to the court to battle Ventura at 7 p.m on Saturday, Feb. 1 in the Sports Pavilion.