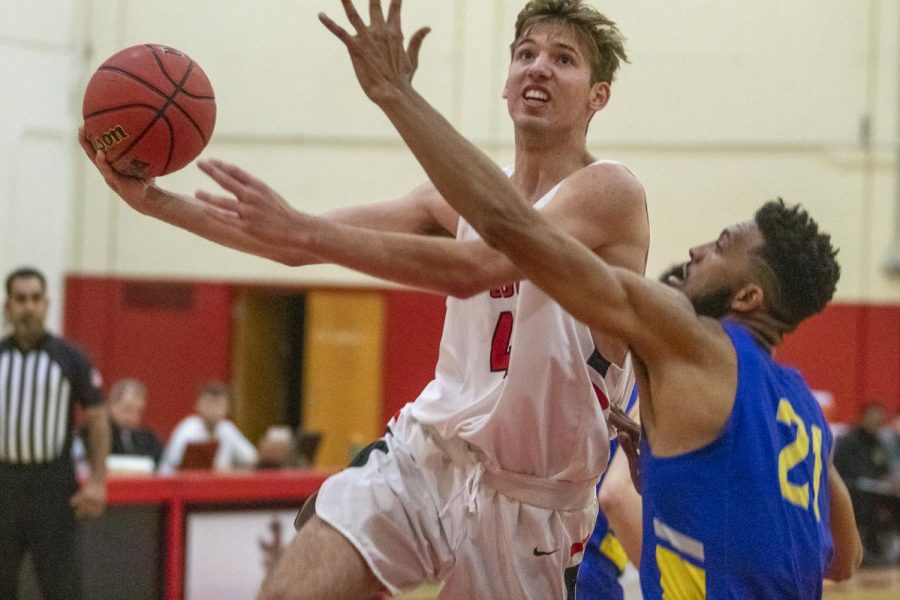 Calvin Winestock (No.42) goes for a layup against Sidney Bowen (No.21) on Wednesday, Jan. 22, 2020, in the Sports Pavilion at City College in Santa Barbara, Calif.

A terrible first half brought the Vaqueros to halftime with a score of 55-8 in a 91-33 loss to the Allan Hancock Bulldogs on Wednesday night.

Down to only seven players on the squad for the evening, the Vaqueros had a hard time keeping up with the full-strength of the Bulldogs.

The Vaqueros began the semester with a much smaller team, losing three players due to academic reasons. Two players were also sidelined with injuries, and one due to sickness.

“We just have a lot of adversity right now,” said Head Coach Morris Hodges after the game.

Coming out after the break, the Vaqueros took more control of the pace of the game and slowed it down to better suit their seven-man-squad. However, this did not make a big enough impact on the game, losing the second half 36-25.

“The pace of the game was tough for us,” said Sophomore guard Joseph Holden. “I just feel we were a little bit rushed.”

Although the Vaqueros were the smaller team, he said they still should do a better job boxing out and battling for rebounds.

As a team, Holden says the Vaqueros just have to play better.

“We have to play with each other, for each other, and do what is needed of us, don’t try to overdo anything and then the outcome will change,” he said.

Holden also mentioned communication as an issue but didn’t believe it was the main cause of the team’s loss.

“They were the better team today, they beat us on the glass and it showed on the scoreboard,” Holden said.

The Vaqueros hit the road for a game against LA Pierce on Saturday before returning home to battle Moorpark at 7 p.m on Wednesday, Jan. 29 in the Sports Pavilion.