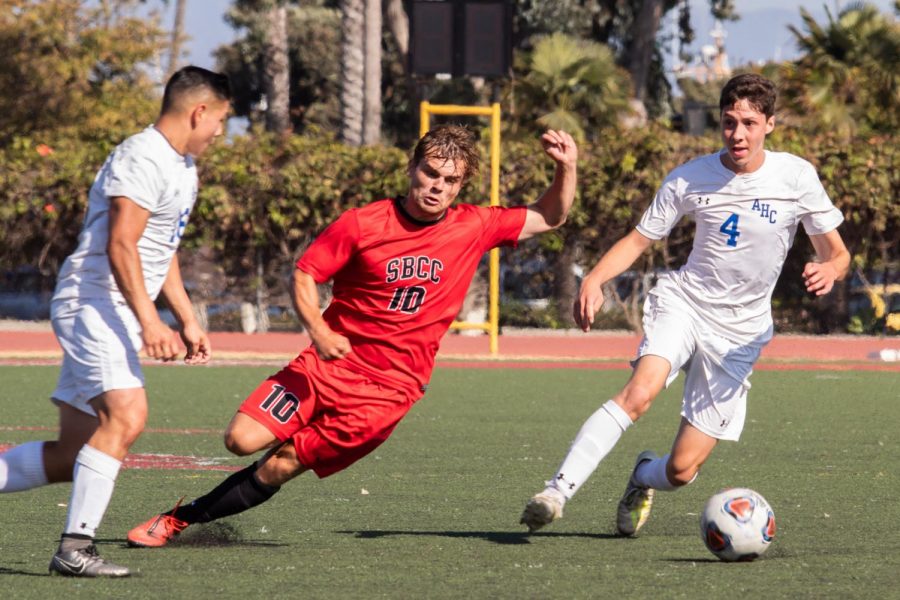 Christopher Robinson (10) cut through the Santa Maria defenders and continued down field towards the goal on Tuesday, Oct. 15, 2019, at La Playa Stadium at City College in Santa Barbara, Calif.

After a handful of power outages and four months of competition, all eight of City College’s fall teams have wrapped up their seasons.

This season featured a strong showing from all sports, with many teams going nearly all the way. Even for the teams that did not reach the playoffs, or were eliminated early on, players were able to embrace their own personal victories and take advantage of time spent with teammates.

The Channels talked with members of many of City College’s fall teams about what moments defined the season, and what they took away from it.

After a 30-5 season, women’s water polo fell to Riverside College but beat Citrus College to take third place in the Southern California Regionals.

The team went undefeated in five home matches, and 25-5 in away and neutral games, and took home its sixth straight Western State Conference title.

Johnson, a first-year goalie from San Diego, said overall the season was a learning experience.

“We grew as people and as players,” she said.

For Johnson and her teammates, taking first in the conference was one of the biggest highlights of the year. After their win over fifth-ranked Citrus on Nov. 9, City College coaches Chuckie Roth and Makenzy Fowler jumped into the pool with their players to celebrate the victory.

“It was just a lot of energy,” Johnson said.

Another highlight of the goalie’s season was the team’s annual Halloween Invitational, in which they played four teams, including the club team from UCSB.

“We had family and friends there and we were on our home turf,” said Johnson.

With a strong season in the books and a new one on the horizon, the Vaqueros return to the pool for another shot at state next fall.

After a two-hour and 42-minute game, which went into double overtime, City College men’s soccer lost to Santa Ana College in a shootout.

Head Coach John Sisterson coached both men’s and women’s soccer to the postseason. The women’s squad lost in the regional finals to Santiago Canyon.

Men’s soccer put up a fight against Santa Ana but was not able to block the final penalty kick.

Though the season ended in defeat for the Vaqueros, the year was still successful in the eyes of freshman forward Christopher Robinson.

“We managed to bring the team to the playoffs and that was our initial goal,” Robinson said.

The forward from Sweden scored 15 points for the Vaqueros this season, starting in all 20 games.

One of Robinson’s favorite games was the Vaqueros’ 2-1 win over College of the Canyons on Sept. 27.

The game entered the 79-minute with the Vaqueros down 1-0, but the team scored two goals within the final 11 minutes of the match to get the win.

“I think it gave us good morale within the team,” Robinson said.

That win helped the team to a 10-4-6 record and a strong season for the predominantly-freshman led squad.

The Vaqueros kicked off the 2019 season at home, beating Compton 57-6 on Sept. 7, but didn’t win again until it’s sixth game of the season on Oct. 19 against LA Pierce. The season had its highlights, however, including a strong performance from Jacob Shultz.

Offensive lineman Brenden Chapman’s favorite moment from the season came in the team’s last game before the American Pacific League playoff, where the Vaqueros squared off against Santa Monica on the road.

In the locker room, players gathered to hear their coaches and teammates lay down the game plan for the second half.

“I kind of gave a little speech,” said Chapman.

In the fourth quarter, quarterback Bradley Kleven completed a pass to wide receiver Cyrus Wallace, and running back Will Bayonne took it into the end zone.

After the win, the Vaqueros blasted music in the locker room.

Since the game was the second-to-last of the season, the Vaqueros were playing through various injuries.

“It was just a lot of adversity we had to get through,” Chapman said.

The Vaqueros return to the La Playa Stadium turf next fall.

The squad, made up of mostly freshmen, went 4-6 in conference play.

In her inaugural season with City College, Head Coach Kat Niksto saw potential in her young team and is excited for next season, when everyone will be stronger and more experienced.

“We were really young this season,” she said.

Niksto’s favorite game this season was the squad’s first home win on Wednesday, Sept. 11 against state-ranked College of the Canyons.

“We felt like [it was] a David versus Goliath situation,” she said.

The Vaqueros won the match in four sets.

“It showed the team that we play best when we’re all one cohesive unit,” Niksto said.

The team has a large, core group of players returning for next season, but Niksto is hard at work finding the best players she can to join the squad.

With fall sports entering the offseason, the focus will now shift to basketball, baseball, softball, tennis, and all of City College’s spring teams.