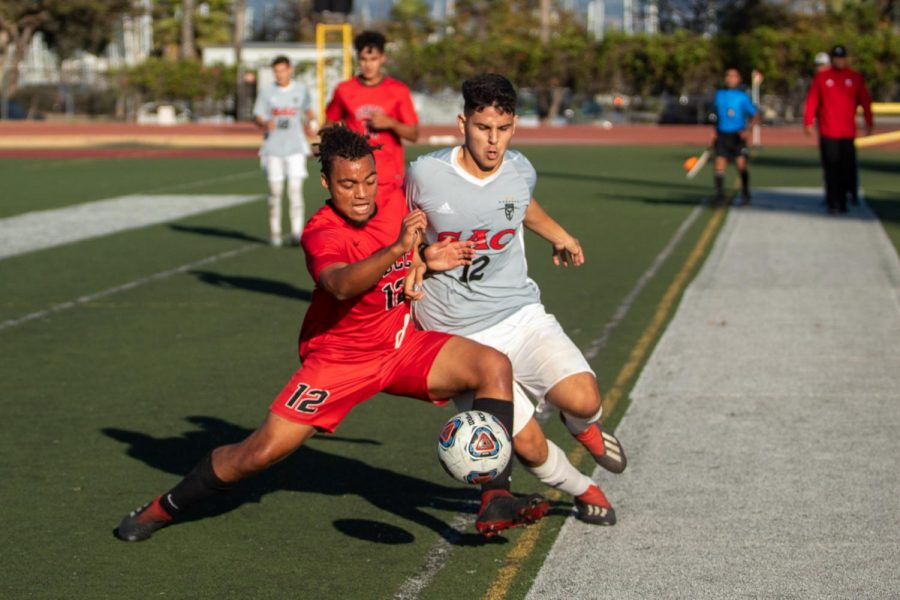 JahMikaili Hutton (No.12) tries to shrug off Bryan Oseguera (No.12) on Saturday Nov. 23, 2019, at La Playa Stadium at City College in Santa Barbara, Calif. After a long game the Vaqueros lost 3-1 in penalty Kicks against Santa Ana.

The eight-seed City College men’s soccer team was eliminated from the playoffs by nine-seed Santa Ana College Saturday afternoon in a close game that ended with a penalty shootout.

The game was tied 2-2 at the end of regulation. Two scoreless overtime periods led to the shootout after 120 minutes of play.

The Vaqueros were expecting to go on the road to play College of the Desert, but the potential opponent dropped in the standings for fielding an ineligible player. This allowed a last-minute switch to a home playoff game for City College.

Head Coach John Sisterson said that there are some losses where “you can hold your heads up high because you competed well,” and he said that this was one of those games.

“I thought everyone played well,” he added.

He called penalty shootouts “a lottery” and said that he was proud of his team for fighting back from a 2-1 second-half deficit.

Vaquero forward Kyle Nicklaw opened the scoring in the final seconds of the first half off an assist from defender JahMikaili Hutton.

Nicklaw, who had just come on to the pitch, explained that defenders can forget to cover players who just came on, so he tried to be unpredictable.

“I reacted fast enough, and I got it into the back of the net,” he said about his scoring play.

Santa Ana responded in the second half, with two similar-looking goals coming 10 minutes apart from the left of the goal to the right corner of the net.

Things looked grim for the Vaqueros as the game neared its conclusion, but a penalty kick 77 minutes in from midfielder Saul Sosa leveled the game at two apiece. Sosa battled an injury throughout the game and was unable to participate in the final shootout.

The defense was good by both teams in the two overtime periods, and each team’s goalie came up with a save on the rare occasion that they faced an on-target shot in the periods.

Santa Ana’s goalkeeper, Frank Aguilar, took center stage in the ensuing shootout. He successfully defended three Vaqueros attempts while drilling his own shot, helping to seal the game for his team.

“We fought hard and gave it our all,” he said.

The home crowd reacted to several controversial calls during the game, but Robinson said he would not use that as an excuse.

Nicklaw was also happy with the Vaqueros’ efforts, for part of the game at least.

Sisterson said that it was a successful one as a whole, despite the early playoff loss.

“It’s been a good season for the boys,” he concluded.