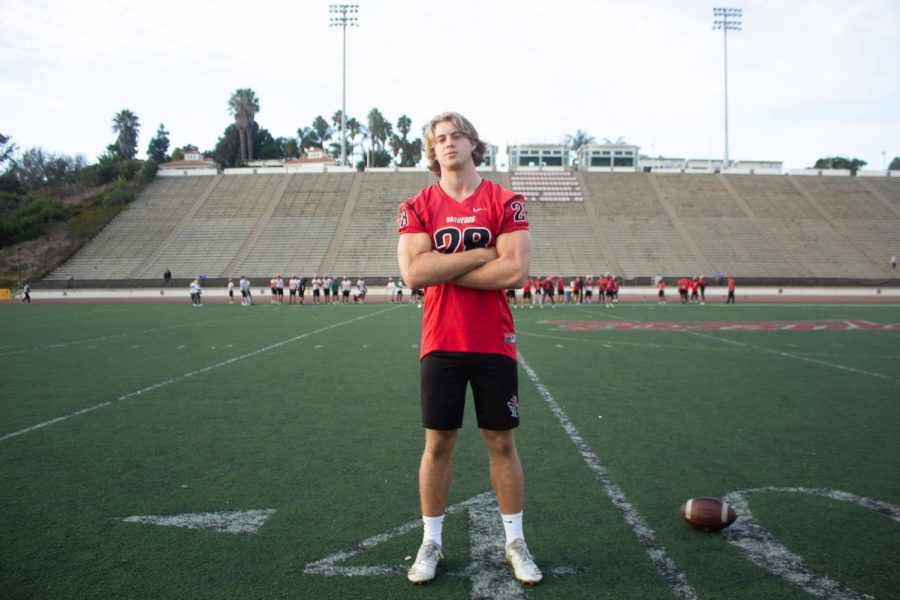 After nearly giving up football before the season started, defensive end Jacob Shultz has broken out as one of City College’s most dominant defenders.

At 6’5” Shultz towers over many of his peers, and his length and athleticism make him difficult for opposing offensive tackles to stop.

“He kinda vaporizes, it makes him hard to block,” he added, referring to the fact that Shultz’s narrow frame creates a small target for the tackle’s hands.

Shultz explained that he likes defensive end because it showcases his athletic ability.

“It’s a great opportunity to get to the running back and quarterback and show a lot of what you can do with speed and rushing,” he said.

A native of Eugene, Oregon, Shultz came to City College to continue playing football after high school. He said that football programs are rare at junior colleges in Oregon, so he headed south to Santa Barbara.

He did not have enough units under his belt to play in his first season, so he spent the year learning and getting comfortable with the defensive scheme.

In the summer Shultz went home to Oregon, and intended to stay permanently.

It nearly signaled an end to his days playing football.

“He wasn’t going to play this year,” Moropoulos said.

After some convincing from Moropoulos, who said that Shultz was passionate and engaged in the class the coach teaches, Shultz decided to stay.

“It was a last minute decision to come back and play, but I’m glad I did,” he said.

“We are happy he came back,” Moropoulos said. “He’s come up big for our defense.”

After a relatively slow start to the season, with only one sack in the first five games, Shultz exploded against LA Pierce College in the first game in-conference.

He tallied nine tackles, four sacks, and four and a half tackles for loss, and returned a fumble 70 yards for a touchdown in a 35-16 victory. He was named American Division Defensive Player of the Week by the Southern California Football Association for his efforts.

“I think it just showed what an effort the whole team made.” Shultz said. “I was fortunate enough to make some plays, but overall it was a team effort.”

Shultz was a force on defense throughout conference play, and he has racked up 71 total tackles, eight and a half sacks, and 20.5 tackles for loss on the season. Those numbers are good for first, second, and first in the American Pacific League.

He also makes an impact off the field.

“He’s one of the funniest guys on the team, while also being one of the hardest workers,” said teammate Brenden Chapman. “He’s got a great switch.”

“He’s an odd duck in a lot of ways,” Willis said. “He marches to the beat of his own drum.”

He made sure to emphasize that it is a positive trait.

Willis added that Schultz leads by example, and complimented his work ethic on the field.

As far as Schultz’s future is concerned, Moropoulos believes that City College might not be his star player’s last stop.

“He has an opportunity to play at the next level,” he said.

Shultz said that he hopes to continue playing football, but he does not know what the future holds.

“I try not to focus too much on that,” he said.