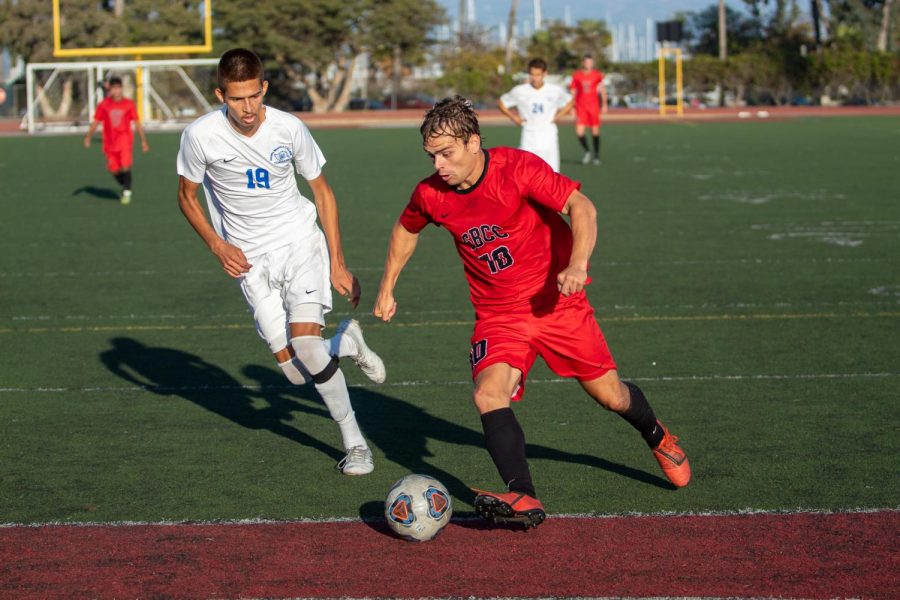 Christopher Robinson (No.10) makes his way towards the goal but Brandon Calderon Ruiz (No.19) tries to stop him on Sunday, Nov. 10, 2019, at La Playa Stadium at City College in Santa Barbara, Calif.

The City College men’s soccer team could not get anything going offensively against Santa Monica College on the way to a 0-0 draw on Sunday.

Originally scheduled for Oct. 29, the match was moved due to the Getty Fire and was the last home game of the season.

Head Coach John Sisterson said that the team “just didn’t click” in the scoreless affair, which brought the Vaqueros to nine wins, three losses and five draws for the season.

“We just couldn’t get it right today,” Sisterson said.

He explained that a pivotal moment in the game came when a shot from midfielder Wayne McClellan appeared to enter the goal for a score, but the referee ruled that it did not.

“We were on our front foot,” he said. “After that we just got a little sloppy.”

Vaqueros goalkeeper Patrick Mahon, who totaled four saves including a crucial one in the waning minutes, agreed that the team could have been sharper.

“The effort is there,” he said. “We’ve got to take our chances when we have them.”

About his save at the end of the game, Mahon said, “I had to keep them out for the team. Our outfielders played so well, letting in a goal would be unfair to them.”

Faced with sturdy defense from the visitors, City College was held to only six shots. Only one was on target, and it was saved by the Santa Monica goalie.

The opponents attempted 14 shots, including nine in the second half alone, but all were either missed or saved.

Sisterson said the lethargic offense may have been due to “Sunday afternoon blues.”

“Unfortunately, it was an important game,” he added.

With the team’s remaining two games coming in-conference and on the road, the Vaqueros will have to play their best to reach the playoffs.

With only one day off, City College will not have much time to make adjustments before another crucial conference clash.

The Vaqueros will be back in action on Tuesday at 3 p.m. against LA Mission on the road.