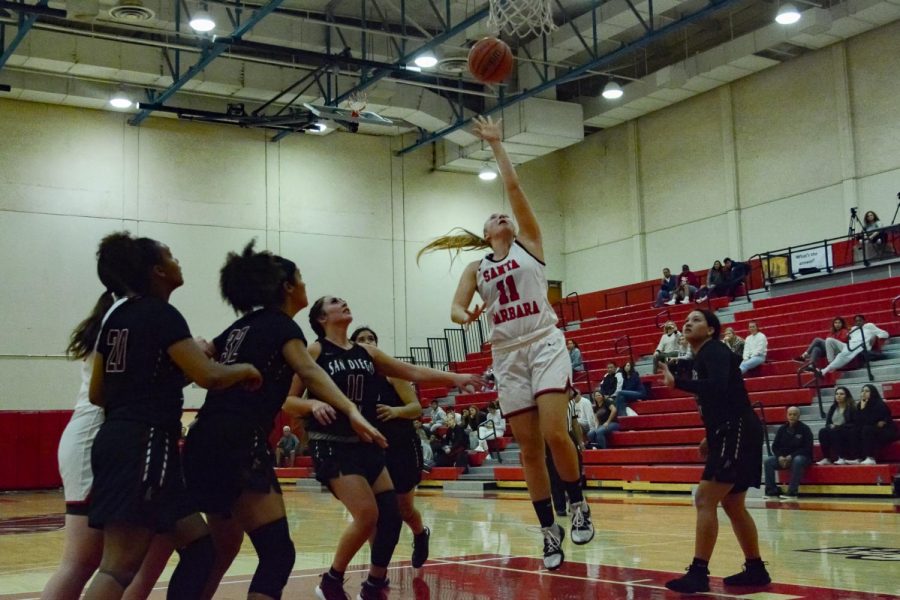 Jordan Parkhurst (No. 11) scores on a lay-up after charging past all of the defenders during the game against San Diego City College on Thursday, Nov. 7, 2019, at City College in Santa Barbara, Calif. The Vaqueros won the game 81-74 after trailing by 10 points in the 4th quarter.

The City College Women’s Basketball team beat the San Diego City College Knights 81-74 after being down 10 points in the fourth quarter.

“That’s what great teams are about, getting through adversity,” said Head Coach Sandrine Krul after the game.

The Vaqueros entered the night 2-1 after winning two of their first three games over the weekend in the annual MTXE Crossover.

This was the first and only time this season that City College will play the Knights, who are 1-3 after Thursday’s loss.

The game was back and forth all night after the Vaqueros got on the board first with a layup by Jordan Parkhurst.

Unlike the Vaqueros’ win against Taft last Friday, where they once held a 34-point lead, City College scored only to have the Knights tie the game or take the lead again.

With the Knights’ defense strong throughout the game, the Vaqueros capitalized on offensive opportunities where they could.

The team made adjustments whenever possible, with standout stars Alondra Jimenez and Sophia Torres leading the way.

“This team, we’re not gonna put our heads down,” said Torres.

Torres has started in all four of the team’s games this season, averaging 30.3 minutes and 19 points in each.

Passing has been a strength for City College this season, with the players able to get down the court quickly and efficiently.

“The team chemistry is all there,” said Torres.

Alondra Jimenez led the team in the comeback win, scoring 12 of her 26 points off a series of well-executed threes.

“We had to get more steals and get easy layups,” said Jimenez.

Jimenez, like Torres, has started all four games so far, averaging 31 minutes and 17.5 points on the season.

The Knights put up a valiant effort against the Vaqueros and came close to getting the win.

They led the Vaqueros in three-point percentage and in rebounds but had twice as many turnovers as the Vaqueros.

13-seconds into the fourth quarter, San Diego forward Lajaei West made a jump shot to extend the Knights’ lead to 10-points.

The Vaqueros answered by scoring 11 points over the next three minutes of the fourth quarter.

“Sharing the ball with my teammates is what I do best,” said Jimenez.

Jimenez and Torres were able to communicate well on the court. They played together in high school, and have proven that they are the Vaqueros’ dynamic duo.

The Vaqueros have kept the home crowd cheering, scoring an average of 70.8 points per game.

The Vaqueros will finish out the month at home, with two games over the next two weeks.

City College returns to the court at 3 p.m. on Saturday, Nov. 16 to battle Antelope Valley in the Sports Pavilion.