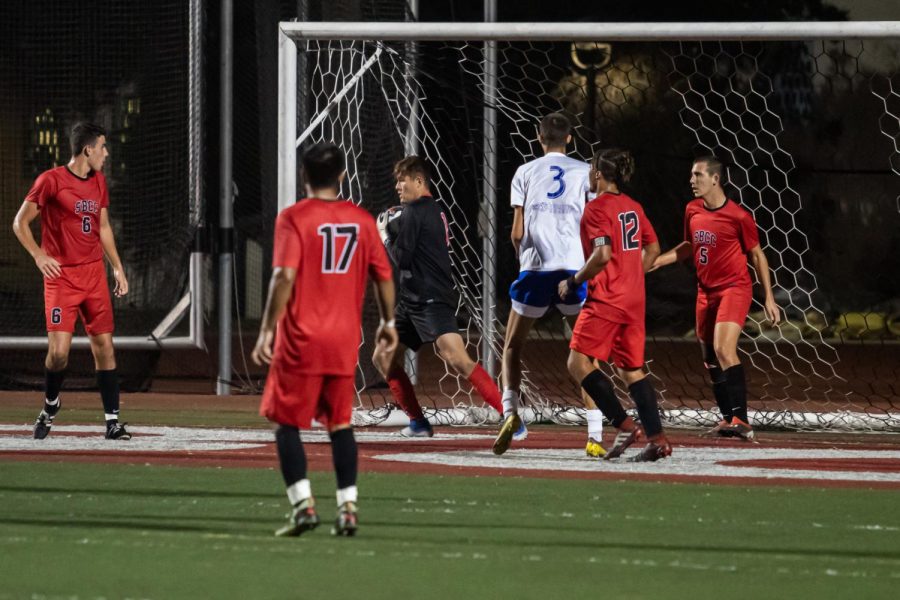 Christopher Robinson (No.10) and Luiz Garcia (No.17) attempt to block a penalty kick from the sideline, as it buzzes over their head they turn to address the other teams offense trying to push through the vaqueros’ defense Tuesday, Nov. 5, 2019, at La Playa Stadium at City College in Santa Barbara, Calif.

Kyle Nicklaw scored a game-winning goal in second-half stoppage time to give City College a huge 1-0 win over Oxnard on Tuesday.

Luiz Garcia took a free-kick from just outside the 18-yard box along the right flank and Nicklaw headered it home.

“It was a great ball in and then Kyle got on the end of it with a nice flick,” Head Coach John Sisterson said.

Nicklaw started the game and was substituted out to begin the second half in favor of some fresh legs off the bench.

Fellow forward Christopher Robinson was injured late in the game, so Nicklaw reentered and scored about 10 minutes later.

“I was pretty happy about coming back on,” Nicklaw said. “I got a little energy back in me so I tried to put as much as I can into it and I just got a result so that was really great.”

The win moves the Vaqueros up in the Southern California rankings and gives them a real shot at making the postseason.

City College has not gotten many positive results in conference play but numerous wins in non-conference games should provide them with enough power points to sneak into the playoffs.

Power points are an algorithm used by the CCCAA to essentially determine the strength of schedule and quality of wins and losses.

The win on Tuesday night will give the Vaqueros a serious boost as the Oxnard Condors came into the game as the fourth-ranked team in all of Southern California.

“We’ve been struggling a little bit during conference games, you know we played well last time against Oxnard but we didn’t get the win, but we knew today was a big must-win game,” said Patrick Mahon.

The sophomore goalkeeper did his part holding Oxnard scoreless on the night.

He made his biggest save of the night 80 minutes in when a Condor forward broke away and got a one on one opportunity.

“I’m just trying to get as big as possible and make sure I save that,” Mahon said. “I’m glad I could do that for the team.”

Mahon was able to stop the shot and deflect it away from the goal for a corner kick.

He then made another goal stopping save just moments later when the cross into the box from the corner was put on goal off the head of a Condor.

After Nicklaw’s goal in stoppage time, the referee did allow play to continue for quite some time as numerous fouls and a yellow card lead to play being paused during the second half.

The Condors made an aggressive push and the Vaqueros defense was strong as those in attendance anxiously awaited that final whistle.

Cheers erupted out of the home stands as the team stayed in the playoff hunt and simultaneously handed Oxnard its first loss in conference play.

The Vaqueros are back in action this at 2 p.m. this Friday as they host Moorpark College.