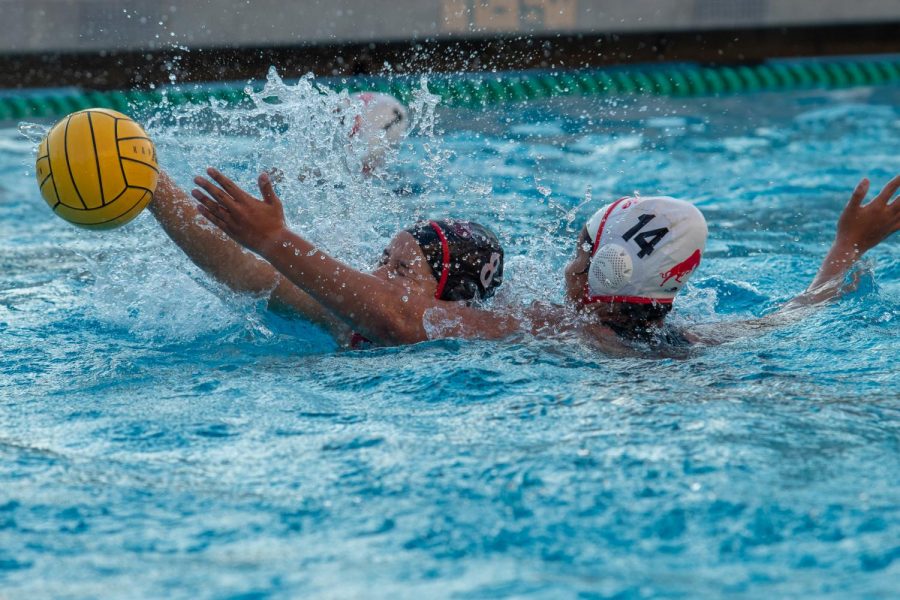 Waverly Golden (No.8) puts pressure on Maria Sandoghdar (No.14) after she lost the ball from her grip on Friday, Nov. 1, 2019, at Santa Barbara High School in Santa Barbara, Calif.

The Vaqueros Women’s water polo team was victorious once again in its annual Halloween Invitational going 4-0 against the competition.

“We had a really great day today, I was really proud of the way we played early in the morning,” said Coach Chuckie Roth.

The win gave the Vaqueros the momentum to dominate in the following games.

Taylor Brooks also scored six goals making them the third Vaquero with more than 100 goals in a single season, at 105 goals in only 28 games.

“I’m pretty proud of Taylor, they’ve had a great season,” said Roth, “There’s no doubt about it, Taylor is a phenomenal athlete and did a really nice job in the pool this weekend and I’m proud of their improvement.”

“That’s pretty cool,” said Brooks after finding out they had taken over the state lead in goals.

The team adapted to its new schedule of three games in five hours fairly well, ending the day 3-0 for Saturday’s competition.

“These girls have been in the water almost five hours today, that’s a long time they played last night too. I’m really proud of their effort and dedication to the team,” said Roth. The Vaqueros continued to play throughout the day, facing UCSB’s Club team and the Cerritos Falcons to conclude its tournament play.

City College’s final game was against the Cerritos Falcons, where the Vaqueros won 8-4.

Zoe Johnson had seven saves and allowed five goals in the battle against the Falcons.

Hana Wigzell also scored two goals to help the Vaqueros stay undefeated in the tournament. Annie Ackert, Madison Wayman, and Allison Kay all contributed one goal apiece for the win.

The fourth and final game of the evening was a friendly match between water polo alumna and current players, all from Roth’s former teams.

In his sixth season at City College, Roth coached the alumna to victory, leading them in 2018 to their fifth straight Western State Conference title.

“We are excited to compete and [competing] for a title, for something together,” said Brooks.

City College carries a four-game winning streak into its next game at the Western State Conference Tournament on Nov. 8 at the Ventura Aquatics Center.