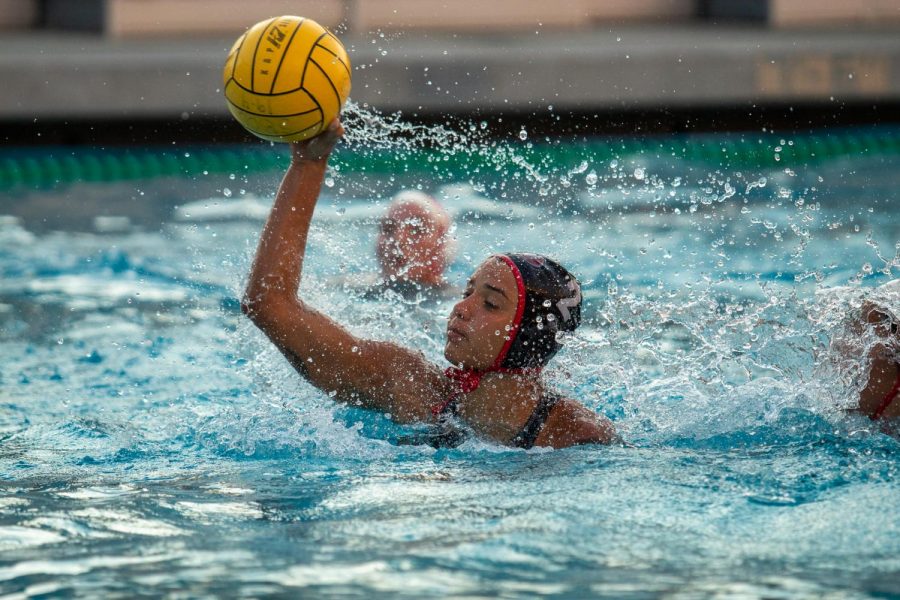 Taylor Brooks (No.2) gets a clean shot off and scores during a game against LA Pierce on Friday, Nov. 1, 2019, at Santa Barbara High School in Santa Barbara, Calif. City College beat LA Pierce 17-4.

City College Women’s Water Polo opened up its annual Halloween Invitational on Friday with a huge conference win over the LA Pierce Vikings and its 38th-straight WSC win.

The Vaqueros are hosting the tournament at Santa Barbara High School where the team will be facing four challengers in a 24-hour span.

The team has an away record of 11-3 since its last home game on Sept. 25 where City College beat the Ventura Pirates 10-4.

With the changed scheduling of Friday’s game, players who don’t traditionally start were able to shine through to help their team get the win over the Vikings.

Coach Chuckie Roth was able to get some new players in the lineup, and one notable difference on Friday was freshman goalie Jayde Maniscalco. She started her third game this season, giving regular starter Zoe Johnson some rest before this weekend’s games.

“Jayde works really hard every day. If there’s an opportunity to play Jayde I’m gonna play Jayde. [she] did a nice job today,” said Coach Roth. Maniscalco made 10 saves and only allowed four goals in the game, helping secure her team the win. Sophomore Taylor Brooks helped the team as well, scoring 6 goals in the 17-4 win.

City College will continue the tournament on Saturday after some minor schedule changes due to the Maria Fire and its effect on the air quality in Santa Barbara.

“We cancelled one game today because of that. We just felt like the air wasn’t great, and we’re hoping for better air tomorrow,” said Coach Roth about the schedule change.

Throughout the game the wind was moderate, picking up only a few times, but the smell of smoke and the darkened sky hung over the Vaqueros.

“I was kind of nervous because of the smoke and everything, so I was worried that was going to make or break our playing,” said Maniscalco, who was concerned for the health and safety of her teammates. “I’m proud of everybody for just sticking through it even with our conditions right now.”

“We should have a big day tomorrow, also have some alumni coming in to watch. It should be fun,” said Coach Roth.

The Vaqueros will play three games on Saturday, first facing West Valley at 8 a.m., who the team was originally scheduled to face on Friday. They will also face UCSB’s Club team at 10 a.m., and Cerritos at 1 p.m at Santa Barbara High.