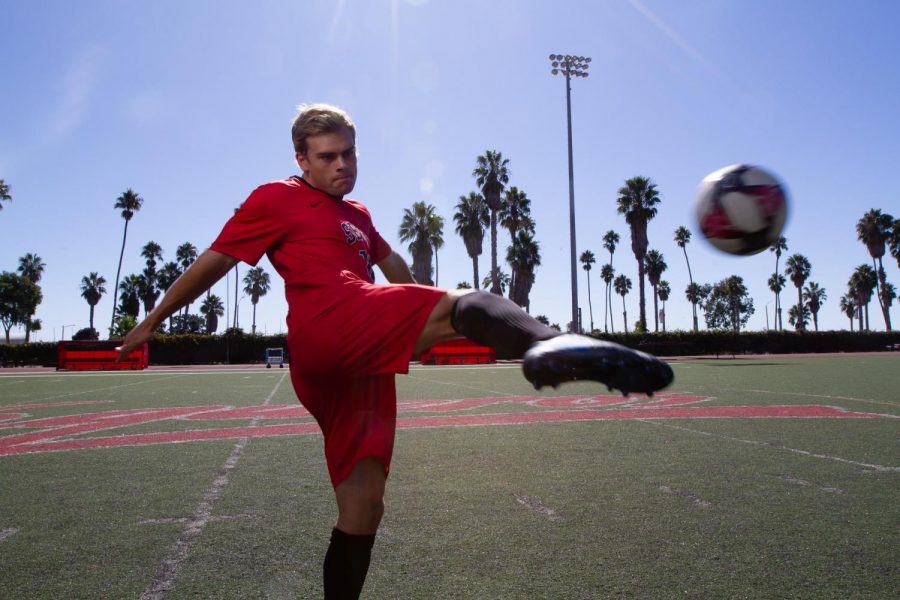 Vaqueros forward Christopher Robinson from Dragonskolan High School in Umea kicks the ball on La Playa field on Wednesday, Oct. 25, 2019, at City College in Santa Barbara, Calif. “We have to win,” said Robinson in reference to upcoming important games, “it’s make it or break it now.”

Christopher Robinson, a freshman forward from Umea, Sweden first picked up a soccer ball at the age of four and immediately fell in love with the sport.

Robinson was born in Stockholm, and he later moved to Umea, a city about the size of Santa Barbara where he spent the majority of his childhood growing up.

“Although the season is short, soccer has always been the biggest sport in Sweden,” said Robinson. “I always gravitated towards it and have been playing since I was four years old.”

Since arriving in Santa Barbara, Chris has settled in and has contributed to the success of the City College men’s soccer team. Putting up some great numbers, Robinson currently sits at six goals and one assist on the year.

Robinson has brought his talent into this years squad and has made an instant impact. With only a little over half the season to play he will look to add to those numbers and help the team reach the playoffs.

“My goal for the team is to make the playoffs and personally it’s to help the team do that in the best way I can,” said Robinson. “Maybe in the back of my head, I feel like I have to put some type of numbers up there but I’ll keep those to myself it’s all about the team winning.”

His road to Santa Barbara started three years ago when he visited his older brother who was attending City College at the time.

Once Robinson saw everything the city of Santa Barbara and City College had to offer, he fell in love with the place.

“I came here to visit my brother three years ago, it’s been pretty good since I got here. It’s such a friendly city and in general American people are very friendly,” said Robinson.

His talent on the field isn’t the only thing that makes people gravitate towards Chris, but rather his character as a person. On the field, Robinson plays tough, hard, and with no mercy, but off the field he is a very approachable and respectful person.

Although Robinson is very passionate about soccer it isn’t his only priority.

He values receiving a good education while in the states.

“I want to go to a four-year university after my time here but I have to prioritize my education,” said Robinson. “If there’s anywhere I can combine the soccer and the education that would be the best outcome for me.”

The Vaqueros have benefited from the arrival of Robinson and they are grateful to have such a well rounded player on and off the field.

“He has great qualities and brings a lot to our program, he has tremendous work ethic and is a very talented,” said head coach John Sisterson. “As a player Chris is so quick, his change of pace and direction is incredible always cuts defenders on the wrong foot, he’s a very good player and we’re very lucky to have him.”

With the team having started conference play at 0-2-2, Robinson will look to turn it up a notch and help the Vaqueros turn things around and make the playoffs.