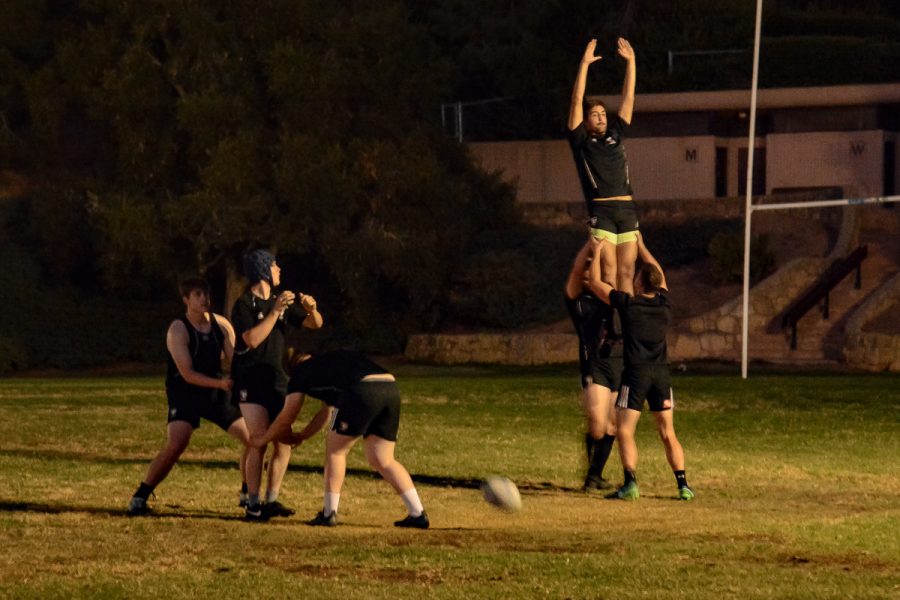 City College rugby players practice their line-out play configurations during their practice on Friday, Oct. 25, 2019, at Elings Park in Santa Barbara, Calif. A line-out play happens after the ball has gone out of play and teams fight for the ball with one of each team member in the air.

The 2019-20 Santa Barbara Rugby Academy season will get underway on Saturday with high expectations after an 11-3 record last year.

The schedule begins with a home game at Elings Park against Grunion Rugby, a local men’s club, as the City College team tries to get off to a strong start.

The academy, which is recognized as a development academy for the U.S. Olympic Team, is classified as a club instead of a school sport in part to expand the number of quality teams that the academy can play.

As a result, many of the schools on the academy’s schedule are unlikely to be found on the calendar for other community college sports teams.

The list of opponents includes university teams like USC and the University of Arizona as well as high-level clubs like San Francisco Golden Gate and Belmont Shore.

Because there is no playoff or championship for a team with the Santa Barbara Rugby Academy’s designation, Head Coach Kevin Battle said that the team’s record does not define a successful season in his eyes.

“The wins will take care of themselves,” he said. “I’m more concerned with focus and effort.”

He explained that the ultimate measuring stick for the success of a two-year program is how many players go on to play at four-year schools when they leave City College.

As far as this year is concerned, Battle said that he has high hopes for the team but didn’t quantify his expectations.

“It’s hard to know what you’ve got until you’re under pressure,” he said.

Star flanker Chris Noggle, who spent part of his summer in Canada playing international rugby with the United States under-20 team, said that he thinks he has improved in a key area since last season.

“I worked on my communication,” he said. “If you get quiet you get disconnected.”

According to Battle, Noggle is not the only player who’s communication and leadership have improved. Battle said that leadership is where the team as a whole has improved the most.

He mentioned Captain Ian Crilly and Vice-Captain Curren Castro, but said that many other players have taken on leadership roles as well.

The toughest game on the academy’s schedule this season will likely be a January road game against Saint Mary’s College, the third ranked college team in the nation. The City College team lost that game by a score of 26-22 last year, and will be looking for revenge.

Noggle said that the game he is looking forward to most is against UCSB.

“That’s always a fun game,” he said. “It hasn’t been very even lately but they’re the only other competitive team in Santa Barbara.”

As a returning player, Noggle looks to use what he learned over the summer to better his game and lead his team to victory.

“It was a great experience playing with guys from all over the country. It helped me remember why this sport is so frickin’ great,” Noggle said.