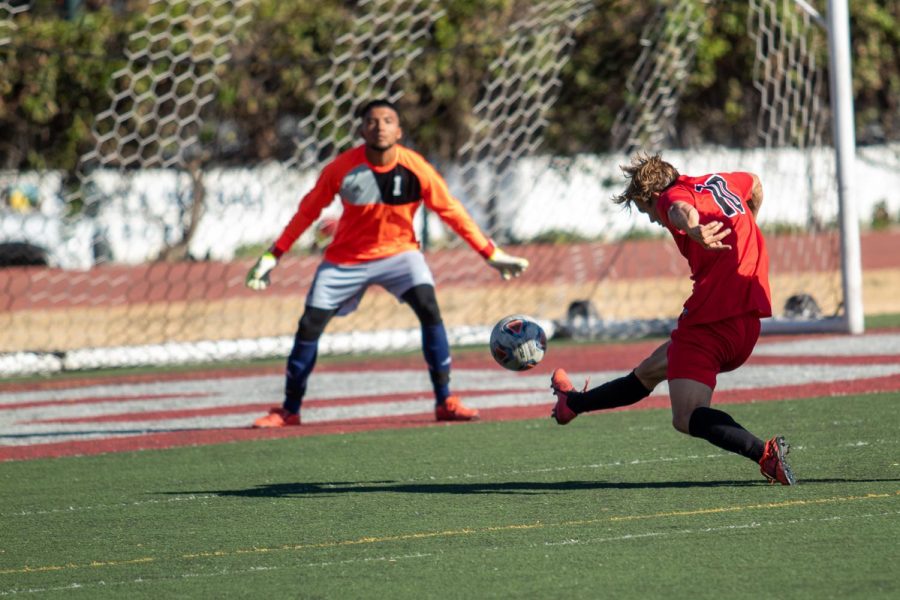 Christopher Robinson (No.10), getting his shot off but Miguel Granados (No.1), stopped the shot from scoring on Oct. 25, 2019, at La Playa Stadium at City College in Santa Barbara, Calif.

The heat seemed to keep the team from finding its usual spark, forcing the Vaqueros to settle for a 1-1 tie.

“We couldn’t get it together and didn’t even have a shot on target,” said Head Coach John Sisterson of the first half. “We just didn’t have the energy, we were quiet I don’t know what was going on that’s usually not us.”

The first goal of the game came on behalf of the visitors 18 minutes in when LA Mission midfielder Mathew Ochoa passed to forward Willy Pocasangre who kicked it past City College goalkeeper Patrick Mahon.

The remainder of the first half was stagnant as neither teams were able to create many scoring opportunities. The Vaqueros were not able to register a single shot on target in the first half for the first time this season.

“In the first half we were not connecting the ball at all,” said City College defender JahMikaili Hutton. “Since we started warmups it was just hot and people were looking tired even at halftime the team just looked sluggish.”

“We spoke to them at halftime and the second half was an entirely different performance,” said Sisterson. “We could’ve gone on to win the game but the most pleasing thing was the way the boys reacted.”

With 15 minutes left to play, City College kept pushing for the equalizer and was finally rewarded when freshman standout Christopher Robinson received the ball out wide off a pass from teammate Luiz Garcia.

It was Robinson’s team-leading sixth goal of the season.

“I got the ball early on the wing, I cut in as usual and just put it in low past the goalie,” said Robinson. “It was a great ball I got it right at my feet, it was just one of those ordinary goals.”

City College continued pushing for the win by continuously creating quality chances to score but would have to settle for the 1-1 draw.

“It can’t take us 45 minutes to wake up,”said Robinson. “The next games we have to be there right from the start, the entire 90 minutes.”

The team will look to record its first win in conference play when it takes on Santa Monica College on the road Tuesday afternoon.