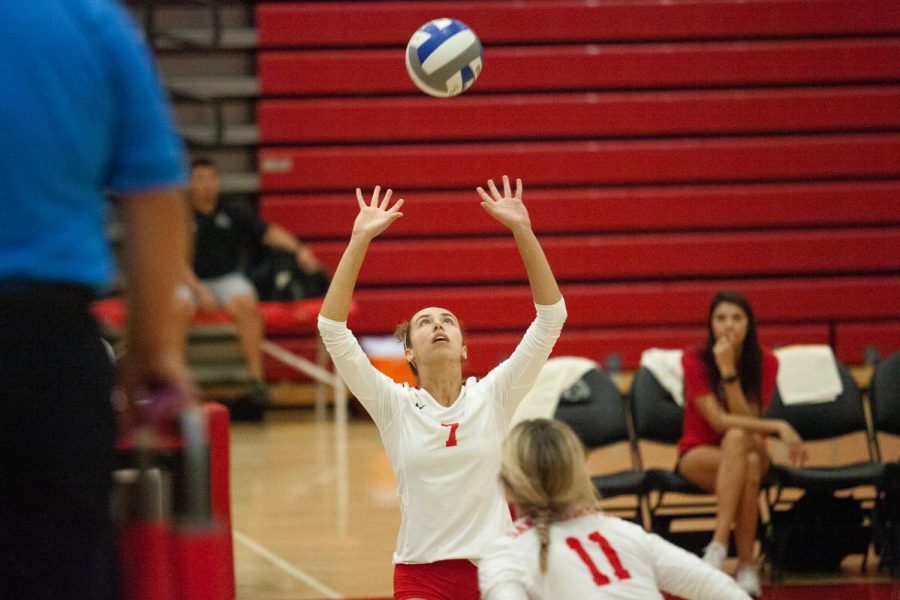 Maranda Newsom (No.7) sets the ball for Madi Mullins (No.11) to spike on Thursday, Oct. 23, 2019, in the Sports Pavilion at City College in Santa Barbara, Calif. The Vaqueros beat Moorpark College 3-2.

City College Women’s Volleyball beat LA Mission 3-2 on Wednesday despite being down 2-0 in the first half of the match.

“We really couldn’t find our fire in the first couple of sets, with a couple of the girls nursing with some injuries and a small team,” said Head Coach Kat Niksto.

“I think we had the right mindset in the second half that we needed in the first half,” said outside hitter Lauren Holsted.

Holsted, Gabi Brewer and Madi Mullins stepped up Wednesday to help their team secure the victory.

“Those girls are always trying to contribute to every match. I’m always on them constantly because I know they have the potential to be really good volleyball players,” said Niksto.

Niksto said Holsted is always trying to lead by example on the court to help her fellow teammates.

In the first two sets of the match, passing proved to be a challenge for the Vaqueros.

“The first half we could have done a little better, and then the second half improved a lot on the passing,” said Brewer.

Despite this, defense ended up being one of the big factors that helped the team win.

“We’ve been practicing a lot on offense and defense nonstop and we definitely showed that we are improving after every practice or match,” said Holsted.

The Vaqueros will face Moorpark in the last home game of the season at 6 p.m on Nov. 8 in the Sports Pavilion.