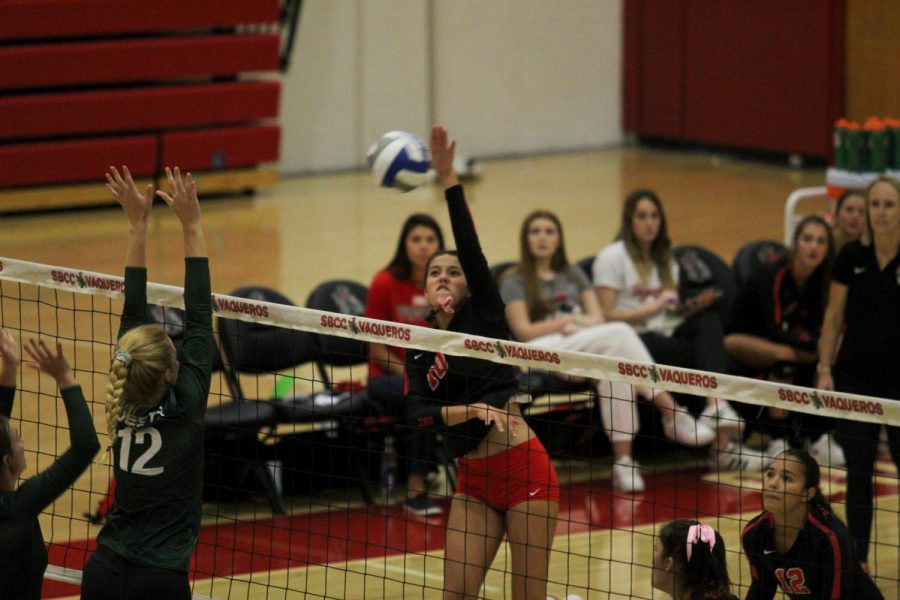 Gabi Brewer (No.10) getting her shot off on Friday, Oct. 11, 2019, in the Sports Pavilion at City College in Santa Barbara, Calif. After forcing over time the Vaqueros fell short losing 3-4 against Cuesta College.

Cuesta beat City College 3-2, and the Vaqueros are now 6-9-1 this season. It is unclear if the team will make the playoffs.

“I think our team has a really bad habit starting the match off slow and then we always come back from it,” said Makenzie Phelps.

City College beat Cuesta in the first set of the match, and then Cuesta came back ready to play.

“We controlled the ball so well in the first set of the match, and then we let them off the hook in set two,” said Head Coach Kat Niksto.

Cuesta beat City College the second and third set of the match, but the Vaqueros beat Cuesta in the fourth set, calling for a fifth.

City College had difficulty controlling the game at the beginning and end of the match.

“We’ve gave them a little breath of air, and then they took it and they just crushed us in game three. I’m really proud of how hard we fought back in game four and we battled in set five,” said Niksto.

City College’s defense kept them in the game.

“I was very happy with our defense, that was probably one of our best defensive games we’ve had all season,” said Niksto.

Madi Mullins, Makenzie Phelps, and Lauren Holsted encouraged their team to not give up and stay in the match.

Cuesta is one of the best teams that City College has played in their conference.

“They run a great program, and they have phenomenal volleyball players that outplayed [us] from start to finish,” said Niksto.

City College’s energy and communication was a big struggle against Cuesta.

“Communication makes a huge difference, we’ve had so many points missed because of misunderstanding on who is going to get the ball,” said Phelps.

City College’s chance at making the playoffs is now in question.

“I always tell the girls my goal is to have each and every one of you to get better after every match and after every practice. I’m proud of our girls for competing and never giving up after some losses,” said Niksto.

City College will host LA Mission at 6 p.m. on Oct. 23, in the Sports Pavilion.