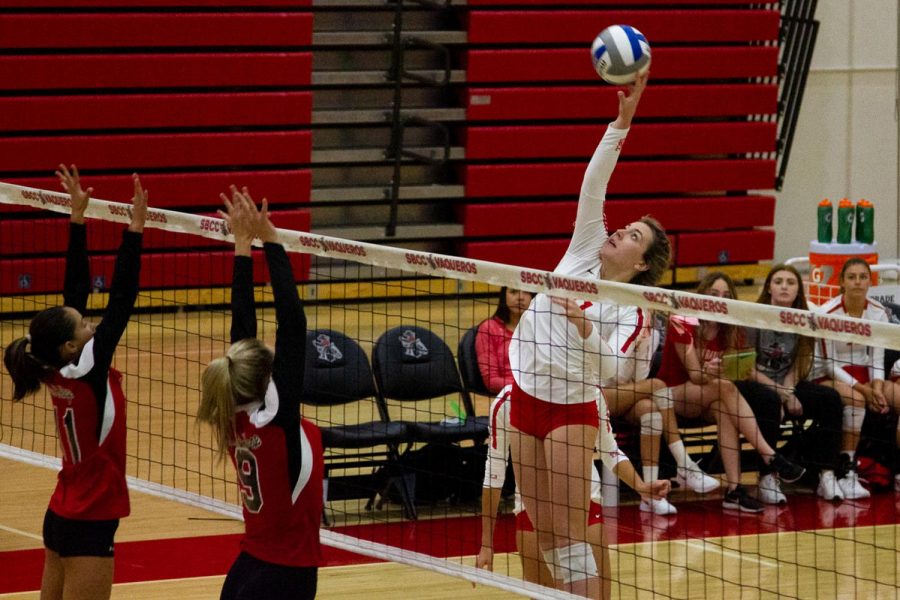 Madi Mullins (No.11) hits and scores a point for the Lady Vaqueros contributing to the 3-0 win against LA Pierce College on Wednesday, Oct. 9, 2019, in the Sports Pavilion at City College in Santa Barbara, Calif.

The City College women’s volleyball team was triumphant against LA Pierce Wednesday, beating them 3-0 and winning their second conference match this season.

“We had a specific game plan going in the match,” said Head Coach Kat Niksto. “We knew that Pierce has struggled in our league so far, and we felt pretty confident going into the match.”

Coach Niksto’s goal is always to improve after each game and practice.

“My goal is always to get better and that was our main focus tonight,” Niksto said. “I was a little disappointed in our overall level of play, the girls know it. I think we should have controlled the tempo and the pace of the game better.”

“We always have things to work on,” Niksto said. “We set some individual goals and some team goals. We hit some of them and we didn’t all hit of them.”

Gabi Brewer, Madie Meyer and Lauren Holsted stepped up in tonight’s game to

help their team secure the victory.

City College had some aces during the match but ended them by hitting the ball in the net, giving the other team a point.

The Vaqueros’ passing was consistent and connecting with the setters helped the team throughout the match.

“We did really well connecting with our setter and all of the hitters did,” Brewer said. “It was a tough serving match for us.”

Even though the offense made some errors during the match, the defense made up for it.

“Once we start playing as a team and getting in our rhythm, we are unstoppable,” Niksto said.