Vaqueros lose to Ventura at home, Wednesday’s game is a must-win 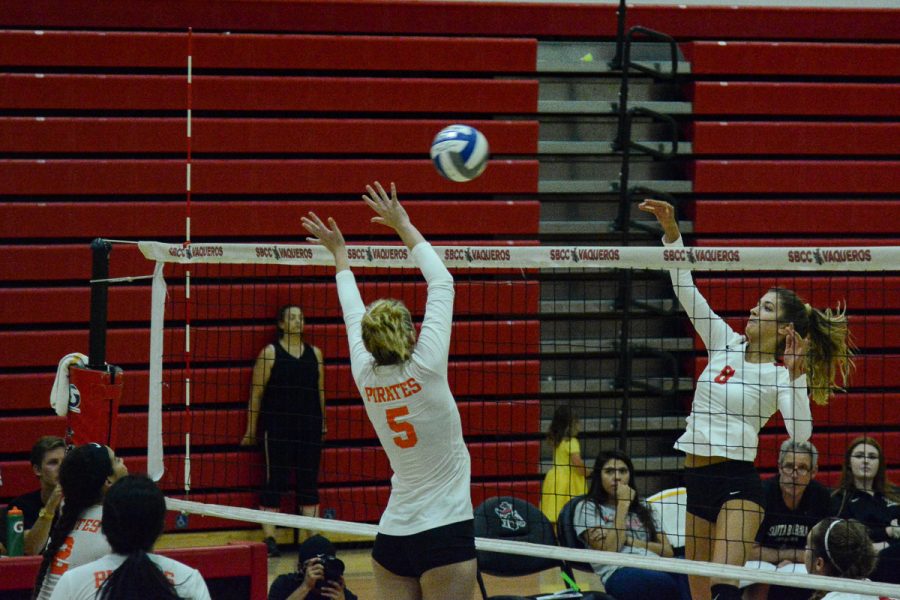 Makenzie Phelps (No. 8) hits the ball past middle blocker Tatum Teel (No. 5) during the third set of the Vaqueros match against the Pirates on Friday, Oct. 4, 2019, in the Sports Pavilion at City College in Santa Barbara, Calif. The Vaqueros lost 3-1.

The City College Women’s Volleyball team lost another tough match against Ventura Friday night, putting their chances of making the playoffs in jeopardy..

The squad lost to Ventura 3-1, making them 5-9 this season. In order to make the playoffs, they have to beat LA Pierce in their next game.

The first two sets of the match were closely contested. The Vaqueros won the second set of the game, which lasted an hour, 45-43.

“That was some good volleyball on both sides of the court, unfortunately we have yet to learn how to play a complete match from start to finish,” said Head Coach Kat Niksto.

“We played really good at the end of every set and the beginning we started off really weak,” said middle blocker Madi Mullins.

City College had a hard time on defense, struggling to stop Ventura players from scoring throughout the game.

“Credit to Ventura they came out ready to play. Number nine, our game plan was to stop her and we didn’t do a good enough job so she killed us from the service line,” said Niksto. “I think both teams had some really good swings and we just couldn’t execute the right plays at the right time.”

There were some big plays made by freshmen Lauren Holsted, Gabi Brewer, and Mullins to keep their team in contention.

“Those girls played their hearts out tonight, I’m very proud of hard they have been working and helping our team,” said Niksto.

The Vaqueros were not consistent enough and had a hard time communicating throughout the game.

“This is going to be a big one because if we didn’t lose to Ventura we would have been in a really good place in the playoffs,” said Niksto of their next match, “but now we have a long road ahead and we’ve only beaten one conference team and that’s not enough to be thinking about playoffs right now.”

The Vaqueros host LA Pierce at 6 p.m on Wednesday in the Sports Pavilion.